Chrislamism: the way forward for Nigeria 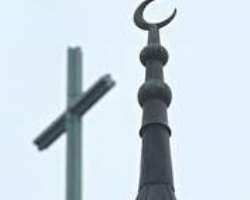 I was prompted to write this after reading Dr Orji Uzor Kalu's recent article in the SUN newspaper in which he strongly argued in favour of a United Nigeria. Somehow, I felt extremely uncomfortable with the way Dr Kalu ended his otherwise brilliant article. His prayer that those who wanted to destroy Nigeria must have destruction waiting for them at the sentinel of their doors sent goose pimples all over my body. He seemed to have sealed and delivered his message. Any one else who had a contrary opinion had already been condemned by the Almighty.


Back to his article on who wants Nigeria dead, I am sure that Nigerians generally understand the fact that with what is happening today in their country, a lot of destruction has already taken place. Worse could still be happening in the foreseeable future, no matter how much they may detest such a development, if Nigerians are unable to handle these challenges in their strides, with a certain measure of sincerity. Luckily, President Jonathan many-pronged approach to the volatile security challanges in the country seems to be paying off.


Talking about destroying Nigeria the way Dr Kalu did was somewhat intriguing because when we talk about Nigeria we are primarily talking about the people who live in the geographical area. The land mass alone cannot be important without the people.

Nigeria was being destroyed by ethnic militias of sorts. Nigeria was dying gradually, killed installmentally by the day, as innocent citizens were massacred in their tens and hundreds by Boko Haram, MEND and the rest of them, militant factions which sprang up almost daily from all nooks and crannies of the country, until President Jonathan recently declared a state of emergency in some states. We even know now that Boko Haram was able to wage a real battle with anti-aircraft guns and missiles against the country's military, a sworn “enemy.”

As Dr Kalu rightfully observed, the basic facts that those who agitate for splitting the country must consider are the complexities and the peculiarities of the Nigerian nation – complexities and peculiarities that distinguish Nigeria from other countries. Unfortunately, by their very nature, these complexities and the peculiarities are the main reason why Nigeria became a sick and troubled country, with little hope of recovering any time soon. It is important that Nigerians themselves do not gloss over this fact. Nigeria's major problem remains how to reconcile the foundational norms of its brand of democracy. The country has a class of democracy it can conveniently call its own, which differs from normal democratic practices all over the developed world.


In a normal democratic dispensation, for instance, the same sets of laws apply to every citizen, no matter how highly or lowly placed in the society. In Nigeria, it is a different situation. Some citizens are guided by Sharia laws, others by Secular laws. This means that two separate judicial systems are operating side-by-side in the democratic entity called Nigeria. It also means that all citizens of this “one nation” are not subject to the same set of laws. And if you ask me, this is the real issue that brought Nigerians where they find themselves today. It is the main reason why Nigerians seem so ungovernable and any means to an end, by hook or crook, appears to be "justifiable".

Take the North and the Sharia laws for example. In this dispensation of justice and legitimacy, a poor man who steals a hen or a goat could have his arm amputated. That is perfectly in agreement with the law. On the contrary, a senior civil servant who steals $US23 million can be given a two-year jail sentence or an option of $US1,500. He pays the fine and walks away to the comfort of his home. The law also allows for that. A woman who commits adultery can be stoned to death for blasphemy. But the man who committed the crime with her is let off the hook. He hasn't got a case to answer. That is perfectly legal. In this dispensation, under-age female children, as young as 10 years old, are encouraged, sometimes forced, to marry even men six times their age. Pedophiles don't exist in the social diary and rape is not recognized by the government.

Obviously, these social values are at gross variance with the values of Southern Nigerians which are more inclined towards Western civilization and Secular laws. This is why clandestine organizations like Boko Haram were so confident. It makes sense to them that Western Education is taboo. So, we see that part of these complexities is the two-face judicial system that Nigerians seem insistent on practising, even when they know that it's practice is a major problem.

Nigerians should, for once, sit back and ask themselves some soul-searching questions. Just for the sake of projection: assuming that the agitators who are bent on putting fire on the ass of the present government have their way to power in 2015, where does the country go from there? Are those ousted by fair or foul means from power likely to sit with folded hands and accept defeat just like that? Are they likely to accept defeat without a struggle, without also being determined to make governance impossible for the incumbent, the way they made it for them while they were in power? No one knows where the pendulum will swing towards yet, even with the current war against the insurgents, some of whom we now know were able to penetrate into and sabotage the efforts of the current government.

It is obvious that a majority of Souhern Nigerians have no confidence in the Sharia justice system. How can they be convinced that it is right for a public officer to steal and stash away millions of his people's money in foreign banks and nothing happens and when a poor man steals a hen or a goat because he is hungry, his arm is amputated. On another level, do Nigerians actually recognize the presence of “indirect rule” in their society, even though some people have said of Nigeria's colonial experience: that colonialism walked away through the door and crept back in, through the window, and is now known as neo-colonialism? How do you convince those who are paid to safeguard the imperial status of “ruling families” that everyone must be equally subjected to the law, or that the law is no respecter of personalities?


As a result of these confusing "interpretations" of the law, Nigeria was gradually but steadily drifting into a culture of impunity. Professor Wole Sonyika promptly warned against the trend leading to executive impunity in government, which could lead to anarchy. Yet somehow, impunity is becoming entrenched in the socio-cultural values of some parts of the country, no doubt. Thosein authority seem determined to show to all and sundry that they are "running things" , as Nigerians would say. With the current frontal attack on insurgency, it is obvious that Nigeria can make itself. Nigeria can also break itself.


To make itself, it has to find a way of making the same set of laws apply to every citizen, irrespective of status. Its legislators have to sit down, debate and pass a new constitution that will be based on the concept of CHRISLAMISM – a well drafted constitution in which the same laws will apply equally to all Nigerian citizens. Also, the government has to tackle corruption the right way, by enacting laws which will make it criminal for employers of labour to owe workers, as it is done in developed countries. When working class families in Nigeria can plan their lives because they know when they will be paid their next wage, incidents of child labour, bribery and corruption will be greatly minimized.

If on the other hand, it is the wish of the gods that Nigeria will disintegrate, it will not be the end of the world. The new countries emerging from the old Nigeria can still come under one economic umbrella such as an expanded ECOWAS. Even an organization as huge as the Commonwealth can still contain them.

Marriage is sweet and more meaningful when there is mutual respect by the cooperating parties. It can never be just or legitimate for one of the merging components to feel privileged and therefore exploit or take advantage of the seeming vulnerability of the other partner in the union. It can never work for too long, if it is "forced marriage". Someday, somehow, the marriage will simply collapse. Indeed, if there was mutual respect among the Hausa, the Igbo and the Yoruba, Nigerians would not have arrived where they are today. To come to that level of mutual respect, and make the marriage work, is the first step towards love for the country and the sort of leadership Dr Kalu has in mind. The problem is: how do Nigerians get about it since Western education is taboo in some parts of the country, and there are powerful men behind the screen?


Sir Asinugo is the editor of London-based Trumpet Newspaper