WE DID NOT ELECT ROTIMI AMAECHI sayS Akpabio, Mimiko 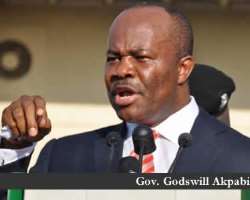 Some governors on Friday evening rejected the re-election of Governor Rotimi Amaechi of Rivers as the Chairman of the Nigeria Governors Forum, NGF. The governors, led by Godswill Akpabio of Akwa Ibom, claim Mr. Amaechi's election held earlier was rigged.

Addressing the press at the end of an emergency meeting at the Akwa Ibom Government House in Abuja, Mr. Akpabio, leading Olusegun Mimiko of Ondo, Peter Obi of Anambra, and others, said the ballot papers used for the election were not serialised thus allowing for manipulation.

Mr. Amaechi defeated Mr. Jang by 19 votes to 16 on Friday at the election held at the Rivers State Government House.

The Presidency and the Peoples Democratic Party leadership had opposed Mr. Amaechi's re-election with the PDP Board of Trustees Chairman, Tony Anenih, claiming the NGF had been hijacked by the opposition.