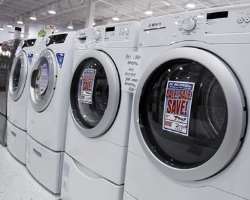 Orders for long-lasting manufactured goods rose more than expected in April, a hopeful sign that a contraction in factory output could soon run its course.

The data was the latest to show the U.S. economy showing surprising resilience in the face of harsh fiscal austerity measures enacted this year.

"(It's) another sign that growth is holding up quite well," said Paul Ashworth, an economist at Capital Economics in Toronto.

While Washington hiked taxes in January and sweeping budget cuts began in March, consumer spending has looked relatively robust and many economists think the U.S. Federal Reserve could begin tapering a monetary stimulus program by the end of the year.

NOT RIP ROARING
Data from earlier this month showed a broader measure of U.S. factory output fell in April for the second straight month, hurt by the European debt crisis which has weighed on demand at factories around the world from Los Angeles to Shanghai.

Friday's report showed a measure of underlying demand in the factory sector, which strips out aircraft and military goods and is a closely watched proxy for business spending plans, advanced 1.2 percent. That was a faster clip than analysts had expected.

Even if that signals a return to growth in the factory sector, economists expect government austerity will nevertheless sap strength from the economy as the year progresses.

"While (Friday's data) was definitely better than expected, I would not mistake this for rip-roaring strength," said Stephen Stanley, an economist at Pierpont Securities in Stamford, Connecticut.

Shipments of core capital goods, which go into calculations of equipment and software spending in the gross domestic product report, fell 1.5 percent. That suggests business spending got off to a weak start in the second quarter, and could reinforce expectations that economic growth will slow during the period. Shipments for capital goods in the defense sector, which is shouldering a large share of Washington's austerity drive, fell 5.6 percent.

Still, the strength in overall new orders was broad based, from transportation to machinery and electronics. Demand for transportation equipment jumped 8.1 percent, boosted by sharp gains in the volatile aircraft segments.

This had been widely expected as plane-maker Boeing received orders for 51 aircraft, up from 39 in March, according to information posted on its website.