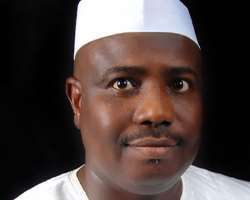 Through its Committees on Justice and Aviation, the House of Representatives yesterday told the Ministry of Aviation and other regulatory agencies to lift the sanctions imposed on the Bombardier jet owned by the Rivers State Government.

The committees said neither the state government nor its officials forged any document to secure flight clearances or any other licence.

The committees recommended that Caverton Helicopter should be prosecuted under S. 36 (4) Civil Aviation Act, Cap. C13 Laws of the Federation of Nigeria, 2004.

But the company yesterday denied any wrong doing in the Rivers aircraft crisis.

The committees claimed that although the government operated its aircraft with expired clearance between April 2 and 26, several other aircraft are suspected to be in a similar situation.

They said the isolation of Rivers State for reprimand has become difficult to deny.

The aircraft was grounded on April 26 by the government, based on alleged infractions, including operating the aircraft with expired clearance, failure to file a flight plan and failure to make a manifest available to regulatory agencies.

The row over the aircraft between the Aviation Ministry and the state government made the House to refer the matter to its committees on Justice and Aviation.

But, in their report signed by the Chairmen of the Justice and Aviation committees, Ali Ahmad and Nkeiruka C. Onyejeocha, the committees confirmed the Bombardier B700-1A11 Global Express marked N565RS as the property of Rivers State.

The report, which was obtained by our correspondent, reads: “That in view of our findings, we hereby make the following recommendations: Rivers State Government should be allowed to comply with the necessary conditions for granting of all required permits and licences of Rivers State Government – owned Bombardier B700 Global Express Registration Number N564Rs;

“For providing information that led the authorities to wrongly believe that Rivers State Government falsified documents thereby leading to grounding of its aircraft, the Attorney – General is requested to consider prosecuting Caverton Helicopter under provisions of S. 36 (4) CIVIL Aviation Act, Cap. C13 Laws of the Federation of Nigeria, 2004.

“Urge the Ministry of Aviation to desist from undue interference in the day-to-day operations of the aviation regulatory authorities as envisaged by the law;

“Urge the aviation regulatory authorities to operate professionally and ensure compliance with international best practices in the industry;

“That the House of Committee on Aviation be mandated to scrutinise the reason for rampant foreign registration of aircraft by their owners and to further investigate all private – use aircraft operating in the country with a view to sanitising their operations and ensuring enforcement of the law in a society that is democratic.”

The committees blamed the Nigerian Civil Aviation Authority (NCAA) for grounding the aircraft without complying with due process, especially notifying the Rivers State government, the owner of the aircraft.

The report said: “When an operator or aircraft is in violation of a regulation, the NCAA reserves the right to impose sanction, depending on how it chooses to treat the severity of the infraction: it may grant waiver, impose civil penalty or other comparable sanctions or suspend, withdraw or revoke the licence, permit or any other approval.

“Where it chooses to vary, suspend or revoke a licence or any other authorisation, it is mandatory that it notifies in writing the offending party, specifying the infraction and period of sanction.

The committees gave the details of the conclusions, which led to its recommendations.

The report said: “Based on its findings, the Committee reaches the following conclusions:

“The aircraft Bombardier B700- IAI I Global Express with Registration Number N565RS is the property of Rivers State government;

“Operational and other navigational charges were received by NAMA and FAAN and other agencies while operating the aircraft and receipts issued without raising alarm as to ownership of the aircraft by Rivers State government;

“Perusal of the Trust Agreement between Rivers State Trustor and Bank of Utah Trustee would have shown this fact of ownership, it is distressing that NCAA and the ministry still fail or refuse to appreciate this simple fact; but since the authorities did not raise ownership issue with several other aircraft having the name of Bank of Utah Trustees, this allegation is in bad faith and grossly unprofessional;

“As the owner, Rivers State government, elected to register the aircraft in the U.S. to save money for the state and avoid unnecessary bureaucracy;

“Rivers State government, through Caverton, applied to the Minister of Aviation to import and operate the aircraft in Nigeria but the application was not consummated. And so, it is being operated in Nigeria as a foreign aircraft for private use;

“As from August 27, 2012, when it applied on behalf of Rivers State to import the aircraft, Caverton maintained agency rationship with the government; although that relationship was abated shortly thereafter with regard to the importation of the aircraft, other aspects of the agency relationship continued, especially relating to applications for flight clearance; however, all relationships between the parties were brought to an end by Caverton’s letter of denunciated to NCAA dated 26 April, 2013;

“As owner and operator of the aircraft, neither Rivers State government nor its officials forged or falsified any document toward securing flight clearances or any other licence;

“Should top management of Caverton deny transacting business with Rivers State government despite its acquiescence of transactions between its member of staff and the Government, then its behaviour smacks of administrative laxity or negligence; alternatively, its behavior lends credence to the ascertion that it was pressured to deny the relationship.

“Caverton should be held accountable for providing information that led NCAA to ground the aircraft, contrary to the provision of the law.”

Caverton helicopter in a statement yesterday by its communication consultant, Mr. Waziri Adio said: “We urge the public to look beyond political considerations and engage the facts as they are;

“We want to restate that the only relationship that we have had with this aircraft was the request for importation, which was communicated to the Minister of Aviation on August 12, 2012. This request was not consummated, as the Canadian company that mandated us to write the initial letter of request (ACASS) later told us to stay action as they were no longer in charge of the aircraft;

“We want to restate that subsequent requests for clearance permit for the aircraft did not originate from us. We maintain that the requests sent for flight clearance in our name were forged and we are inviting security agencies to investigate the matter;

“We also maintain that the curious attempt to conflate request for importation with application for flight clearances is at best tendentious. The two are not, and cannot be, the same;

“We challenge the Rivers State government to show evidence that it has a contractual relationship with us on this aircraft. We challenge Rivers State to show any mandate, any contract, any correspondence, any form of payment to us for providing the purported services to them in the last eight months as they claimed. It is inconceivable that, as a business, we will be providing the purported services to them for free and without any form of documentation.”