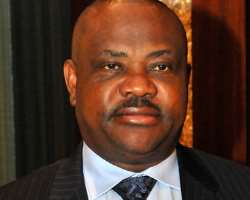 
SAN FRANCISCO, May 23, (THEWILL) - A group in Rivers State, the Rivers State Coalition For Peace and Development, has accused Minister of State for Education, Mr. Nyesom Wike, of hiring former militants and miscreants in order to destabilise Rivers State and the administration of Governor Rotimi Chibuike Amaechi.

The protesters later stormed the Rivers State Government House and demanded the resignation of the Governor amongst other demands.


The full text of the statement signed by Ichegbo Wobihele and Honourable Daerebo Awoyesuku, Chairman and Secretary respectively reads:

“Early on Tuesday May 22, 2013, Rivers people woke up to the rude shock of the miscreants and criminals in the guise of ex-militants parading the streets of Port Harcourt. The sad spectacle was a reminder of the inglorious days when Rivers people were held hostage by the guns of thieves, kidnappers and murderers.


“The hired crowd was made up of hoodlums and criminals belonging to the notorious quartet of Tom Ateke, Asari Dokubo, Soboma Jackreece (popularly known as Egberi Papa) and Solomon Ndigbara (a wanted criminal known as Osama Bin Laden, from Yeghe community who attacked Governor Amaechi’s helicopter during the Ogoni day celebration in 2011). Curiously, the hoodlums arrived at the government house gate right after the departure of the AIG Zone 6, Calabar and his team.

For three hours or more, they barricaded the gates of the Rivers State government house. Curiously, the miscreants were escorted with cooling vans that supplied food and drinks as they rampaged. The protesters also boasted that they are ready for a confrontation with the police and the military. We commend the fact that Governor Amaechi and the Government House security personnel exercised restraint and did not as much as lift a finger against the protesters.


“Only last week, the Minister of State of Education, Nyesom Ezebunwo Wike, had donated his salary for the next six months to the foundation of General Tompolo, an action that was posted on the web site of the organization clearly. We worry that this may be a confirmation of the renewal of official sponsorship of criminality and impunity using public funds.


“We are conscious of the attempt by Mr. Wike and other highly placed individuals and politicians to foment trouble and create a semblance of disorder in Rivers State. Yesterday four coaster buses loaded with unknown persons came into Rivers State from Akwa Ibom state, for the continuation of the militants’ protest. Buses have also arrived into the state from neighboring Bayelsa carrying militants mobilized by Soboma Jackreece.


“Rivers people are worried that such persons will spare no cost and consider nothing sacred in their quest for power. We want to remind Nigeria that it was not too long ago when Rivers State was the fault line of the Niger Delta militancy crises. At a time there was total lawlessness and the state was dangerous as a result of the activities of these same people. Governor Chibuike Rotimi Amaechi's restored peace and security by putting these hoodlums out of business in the state. This he did with the active support of previous security agency heads especially the police.


“Yesterday, Solomon Ndigbara confessed as much when he announced to the crowd that Governor Amaechi had declared him a wanted man and a criminal. Now, these same criminals have been given free passage back into Port Harcourt with the active support of people like Mr. Wike and the armed guidance of the police under Commissioner Mbu.


“Yesterday’s incidence has made it obvious that the time has come for Rivers people to ask questions about their security from Mr. Wike and his sponsors. The time has come for the IG of police to explain to Nigerians why he should insist on keeping a Commissioner of police who is openly partisan in the state.


“We would like to draw the attention of the President and Commander in Chief, President Goodluck Ebele Jonathan to this worrisome resurrection of militancy and criminality and hope that both he and Governor Chibuike Rotimi Amaechi, the law enforcement agents and security persons are aware of the burden of history and will do their utmost to ensure that no one jeopardizes the peace and security of our dear state and country.

We expect that their oath of office which places on them the responsibility to guarantee our security will compel them to investigate the embarrassing spectacle that took place in Port Harcourt yesterday and compel them to not only notice this ill wind that blows no one any good but to take urgent and appropriate action.”