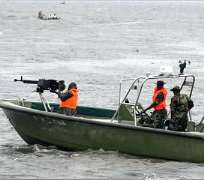 SAN FRANCISCO, May 23, (THEWILL) - The Nigerian Navy has intensified the campaign against crude oil theft in the Niger Delta by deploying a gunboat and more patrol vessels to patrol the creeks and waterways of the oil-rich region.

The development is coming few days after the United Kingdom and the United States offered to give a major boost to the efforts of the Nigerian Navy in stopping illegal bunkering in Nigeria.

The deployment of more vessels and gunboat to the Niger Delta area to combat oil thieves was announced on Wednesday in Warri, by the Flag Officer Commanding (FOC), Central Naval Command, Rear Admiral Johnson Olutoyin.

The Navy Commander, who disclosed this while speaking with newsmen while on a biannual inspection of Navy formations under his Command, said his men were ready to give oil thieves in the area a good fight.

Olutoyin said all strategically located areas, including the Forward Operational Base (FOB), have been fortified to block all the loopholes and escape route of the oil thieves. He said some vessels were recently deployed from the Navy Headquarters in Abuja.

Olutoyin, who commended the effort of the Commander, NNS Delta, Warri Naval Base, Commodore Mohammed Garba, and his men for setting a good precedent in the on-going battle, also urged the base to do more in order to make the waterways free of illegal activities.

“Delta area of the Navy has really made a lot of arrests and more arrests are still being made to stamp out illegalities in the creeks. We will however not relent in our effort in ensuring that all is well,” he said.

The Navy chief also promised to channel the requests of the base on their various challenges to the Navy Headquarters for prompt action.

While inaugurating the emergency unit of the Navy Hospital and the Navy Officers Wives Association (NOWA) School at the base, Admiral Olutoyin commended the various departmental heads of the establishment.

He promised that more camouflage Navy uniforms will be provided from the Navy Headquarters, saying “No effort will be spared in ensuring that the best treatment is accorded every hard-working Naval personnel.”

According to Olutoyin, “We have the personnel on ground that will always do the Nigerian Navy Service (NNS) and the country proud as we are irrevocably determined to defend and uphold the pride of the Navy, “ even as he warned that the Navy would not condone any act of sabotage.

It would be recalled that the Petroleum Minister, Diezanni Allison-Madueke, had disclosed that governments in the Niger Delta were collaborating with Service Chiefs to sensitise the affected communities on the dangers of illegal refineries on the environment.

She had warned on the dangers of illegal refineries, popularly known as “firewood distilleries,” on the environment and human beings, saying new-born babies face the risk of various disabilities in new born babies.