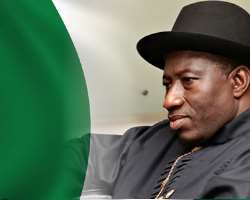 Our own President Goodluck Ebele Jonathan is not as lucky. His is the reverse of President Mugabe’s despotic totalitarianism. Even with Jonathan’s soft and humble disposition, a Nigerian opposition group still termed him despotic. Nigeria’s opposition parties especially from Katsina and some southern states promote their party image makers from the result of their monthly “Jonathan Bashing competitions. It is incredible and highly unethical how these opposition party Public Relation Managers go the whole hog to exhaust all available guttersnipe language on President Jonathan to debase and impugn his character.

Looking at Jonathan's bashing philosophically, I tow the president’s attitude of ignoring these fame-seeking little minds who are only waiting to make a mountain out of a Presidential fury.

These scums who always expect a pay rise after such Jonathan bashings use words like “dumb fisherman, drunken fisherman, a man without a shoe etc. These are the more printable of their epithets.

These and so many unfortunate problems are just a tiny piece of the cross President Goodluck Ebele Jonathan has to bear for defying the northern declaration of making Nigeria ungovernable if a Northerner is not allowed to rule this country.

I could not pacify the frayed nerves of one Dan Asonye who phoned in from Port Harcourt with fury asking me why the House of Representatives is inviting Asari Dokubo for questioning when they have not questioned former President Muhamadu Buhari who cued the boko haram uprising by his post 2011 Presidential election speech. Even recently Buhari has promised fire and brimstone if the 2015 Presidential election is rigged. Buhari’s myopic understanding of rigging is any election that he does not win.

It surprises me also that the lawmakers are not also inviting Mr. Farouk Adamu Aliyu, a former member of the House of Representative who is also a CPC chieftain who said on 7th May 2013 that it is either a northern President or no Nigeria.

I then told Mr. Dan Asonye that he has failed to see the difference between Buhari and Dokubo. Muhammadu Buhari is a Fulani of the Nigerian ruling class while Asari Dokubo is an Izon from the south-south who could never aspire to be president of this “WAZOBIA” country even though his kinsman has by an inexplicable streak of goodluck pole-vaulted into the Hausa / Yoruba Presidential Club.

Asari Dokubo will defend himself comprehensively and make them realize that this country does not belong to the Hausa / Fulani alone, who have succeeded in holding the rest of us down with very bogus and fallacious census incongruities. He will tell them that this country was founded on a fatuous WAZOBIAn tripod. Nothing was done to assure the minority of an equality status in a Nigerian Federation.

And so President Goodluck Jonathan has to placate the North to even keep his job as the North is in a great hurry to take over the reigns of power. And so all the high caliber positions have to go to the North. The National Security Adviser (NSA) the Inspector general of Police, the controller General of Customs. In the Police, Customs and Excise and many other Federal Parastatals, the top management is grossly skewed to favour Northern Officers who in some cases have over 70% in the top management echelon.

For instance the Nigerian Police Force has about 22 Assistant Inspectors General of Police in 12 police zonal Commands. Out of these 22 AIGS, there is none from the South Eastern State. Out of 9 newly promoted commissioner of Police on 3rd of May 2013, only one is of Southwestern Origin. All the other 8 commissioners are from Northern Nigeria. How pathetic.

These are the burdens the President has to bear. On March 12, 2013, the President granted unconditional pardon to Governor Alamieyeseigha and several others but the opposition nearly set the country ablaze just because the former governor is from the same state with the President.

But by far the President’s biggest cross and most successful Northern strategy to confuse and distract President Goodluck Jonathan and even make his tenure as President an intimidating “ass ache” is the northern introduction of boko haram.

boko haram, which is a well refurbished and well engineered assemblage of the old ill equipped, bow and arrow outfit, underwent both structural and organizational metamorphosis in anticipation of a President Goodluck Jonathan victory in the 2011 Presidential Election.

The creators of boko haram are the untouchable northern elite who sit in mountain castles overseeing the ungovernableness of Nigeria. But recent observations reveal that the sponsors of the present boko haram have almost lost control over the bloodsucking organization. boko haram has therefore become a Frankenstein to its sponsors who have reduced sponsorship to the consternation of the boko haram leaders. The boko haram leaders themselves have now resorted to executive kidnapping to raise enormous capital for their capital-intensive venture whose ultimate aim is to rubbish, intimidate and overthrow the President Jonathan administration.

Indeed boko haram is the greatest cross President Goodluck Jonathan has to bear throughout his presidency and maybe for ever as he may later have reasons to blame himselve for not stamping out the menace once and for all.

On a daily basis boko haram has continued the outpouring of its undiluted venom on the Nigerian population, pillaging, burning, raping, killing, maiming all the way with a Federal Government political advantage over the army. I am aware that the Nigerian Army is bound by a Federal Government Code of Conduct in its fight against boko haram. This unwarranted restriction to pacify the North’s greatest advocates of boko haram is another cross weighing heavily on Jonathan’s shoulders.

Baga, a small fishing village was a boko haram base until the army attacked on Tuesday 17, April 2013. The Northern sponsors of boko haram mobilized even the southern press to hype the attack to celebrate and elevate boko haram. The press gave outrageous figures to embarrass the President Goodluck Jonathan administration, giving the Baga casualty figures as 185 dead and 3000 house razed down. And most Nigerian believe this cock and bull story in a small fishing camp with far less than 1000 houses, according to the National Emergency Management Authority (NEMA). The press also blew up the story without verification to say Baga was littered with mass graves. Separate reports by the Chief of Defence Staff, NEMA, Federal Ministry of Lands Housing and Urban Development confirm that there are only two graveyards in Baga-with 32 fresh graves and the Kukawa Local Government Area Chairman confirmed that Muslims do not allow 2 corpses in a grave.

Local and international press put the burnt houses at 3000 in a tiny fishing camp with mainly thatch roofed houses. Who built 3000 houses in Baga. A Nigerian Senator who is an apparent sponsor of boko haram from one of the Northern States even mischievously put the number of burnt houses at 4000.

Even though all Nigerians know the real arsonists, the press found it more convenient to heap the blame on the multi-National Joint Taskforce led by General Edokpayi. boko haram has never attacked their target without burning it down. It is their regular trade mark and the tatched roofs of Baga assisted the arson.

The internally displaced person’s (IDPs) camp as at 25th April 2013, eight days after the attack recorded only 642 persons in a town with 4000 houses and may be 80000 people. There lies the lies of the Baga expedition.

In 1980, it took frantic planning and scheming for the then governor of Kano State, late Abubakar Rimi to get the assent of a reluctant President Shehu Aliu Shagari to involve the military in flushing out the Maitasine menace. It took the military only one day to track down the dreaded Maitasine and when he was wasted, his followers fizzled out and many of them who came from Niger, Chad and Benin returned to their countries.

Who says these boko haram leaders and fighters are faceless. How can they be faceless, are they spirits? The communities in which they live know them very well. Their local government chairmen must definitely have information about them. They have neighbours and we deceive ourselves if we say the governors do not have any information about them.

And in Bama on Tuesday 7th May 2013, these demonic savages struck again razing a police station to the ground and killing 22 officers. They also attacked a military barracks killing 2 soldiers. They went to the Bama prison, killed 14 warders and freed 105 prisoners to swell their ranks. Four innocent civilians and 13 of the boko haram members lost their lives in the dare devil attack, thus totaling 55 dead.

For some Nigerians these are mere statistics. For some of us who have battered our humanity and conscience for a mess of pottage, these are mere figures.

But I am concerned by the mindless carnage perpetrated by boko haram on a daily basis, I am involved as part of my humanity is daily diminished. I am deeply concerned with such an eerie and Mephistophelean situation that has no end in sight. I am deeply worried. I am deeply traumatized.

These same boko haram infidels contrived to shoot down the President’s jet on his last visit to Borno State. This is because in terms of ground artillery, they have the same types of arsenal as the Nigerian Army. And they move in a convoy, yet we delude ourselves by saying that they are faceless, they are spirits. For instance in the Bama attack of 7th May, they came in a convoy of buses they came, they conquered and they escaped in the open glare of the whole world and yet some one is telling me boko haram is a faceless organization. I am convinced that some one, some where is being economical with the truth.

The amnesty issue for boko haram is a non-starter but because some of these same sponsors of the evil sect will make enormous profit, they have decided to egg the president on. The amnesty package we are told is about N20Million Naira for the leaders and M5N for every boko haram fighter. If this tentative mouth watering largesse is confirmed, how will the money be doled out, who will dole out these billions of dollars to these faceless boko haram cultists. Will they then now wear human faces. In actual fact, the amnesty advocates are more interested in what they will get from the amnesty largesse

Most of these amnesty funds will go to these foreign almajiris from Chad, Niger and Benin who have truly been doing the killing because I shudder to think that my own fellow Nigerians will slit a human throat or plunge a long knife deep into a pregnant woman’s stomach and dislodge the unborn child. Nigeria, how deep have thou sunk into the quagmire of satanic iniquity.

All Nigerians must join hands to fight this great evil before it consumes us all, before it puts a wedge on this nation and splits us asunder