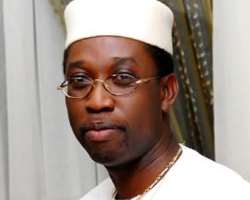 As the race for the 2015 Governorship election hots up in Delta State, the Chairman, Senate Committee on Health, Senator Arthur Ifeanyi Okowa who has his eyes on taken over from Dr. Emmanuel Uduaghan in Asaba is currently enmeshed in alleged fraud. â€¨


Frontier News is in possession of a petition to Senate President David Mark dated April 8th, 2013 in which Senator Okowa was alleged to have collected N185 million on behalf of Hon Dumbiri Uweh without remitting same to him. â€¨


The petitioner also alleged that the governorship hopeful has also been sending assassins on his trail threatening him to drop the matter that is already before the Economic and Financial Crimes Commission (EFCC).


In the petition copied to the National Chairman of the Peoples Democratic Party, Alhaji Bamanga Tukur, Chairman of the party’s Board of Trustees, Chief Tony Anenih, the State Security Service (SSS) and the Political Adviser to the President, Alhaji Ahmed Gulak, the embattled senator was said to have played the role of a mediator in the settlement of a dispute between the former Acting Governor of Delta State and member of the state assembly representing Ika North East constituency, Prince Sam Obi and the petitioner, Mr Uweh.â€¨According to Hon. Uweh, he contested against Prince Obi for the 2007 House of Assembly primaries for the Ika North East state constituency in which he defeated Prince Obi.â€¨


But Prince Obi’s name was wrongfully used to replace his name, the development which made him to file a petition before the Elections Petitions Tribunal. â€¨In the process of the legal works, Prince Sam Obi was elected Speaker of Delta State House of Assembly and later Acting Governor of the state upon the nullification of the election of Governor Emmanuel Uduaghan as governor in the last quarter of 2010. â€¨


The petitioner affirmed that he was approached in a meeting in Abuja by the Obi of Owa in Ika North East Local Government and [Rtd] Hon Justice S. A. Ehiwario on behalf of Prince Obi and some political leaders in the state when it was eminent that the case would swing in his favour for out of court settlement in order to allow for stability in the polity. â€¨


But the issue was not resolved until the second parley held at Grand Hotel Asaba, Delta State capital where Senator Ifeanyi Okowa served as the mediator on behalf of his friend, Prince Obi, with his own lawyer, Mr. E. Azinge, SAN and Mr. Jonathan Nnajiofor as well as the other people Prince Obi sent earlier on were in attendance. â€¨


According to Hon Uweh, the meeting resolved that Prince Sam Obi paid him the sum of N200 million as the campaign expenses demanded by him apart from been appointed commissioner in the in-coming administration in the state from May 29, 2011. N15 million was subsequently paid to his bank account in two tranches through Senator Okowa before he allegedly refused to deliver the balance of N185 million. â€¨


The petitioner claimed that the first breach of the agreement was his been dropped as commissioner after the re-election of Governor Uduaghan adding that he served for only six months as commissioner which was against the earlier agreement. â€¨


Prince Obi was said to have confirmed to the EFCC that he had fulfilled the tenets of the agreement by paying the balance N185 million through Senator Okowa when the anti-graft agency investigated the matter. â€¨


He said the PDP leadership in the state and some prominent traditional rulers had intervened to no avail to ensure that the embattled senator paid him his money.


Rather, Senator Okowa has been sending threat messages to him to drop the matter or lose his life while he has since been avoiding his calls.