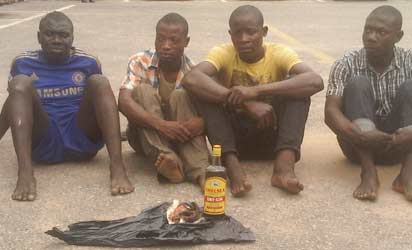 DEALERS: Fatai Akinwowo, herbalist (left) and alleged suppliers of human parts. On the ground are suspected mixture of ground human head and local gin in a bottle alongside a human finger, allegedly recovered from the suspects.

One of them, Agboola Kolawole, who blamed his indulgence on poverty and inability to pay his children's school fees, disclosed that he had so far sold four heads of his deceased siblings to a herbalist, who in turn sold to some persons they identified simply as Alhajis.

The Alhajis, as gathered, offered to pay one of the suspects N40,000 to get a live human being, only for the suspect, Sanni Kazeem, to be apprehended during his search for prey.

Recovered from one of the arrested herbalists, identified as Ajibade Rafiu (40), who the suspects said they supply with the human parts, was a dried human finger suspected to be that of a lady, and a concoction, which he said was made from ground human head mixed with local gin.

The concoction, according to Rafiu, was to fortify him against spiritual attack.

Arrest, confession
Their arrest, according to the Command's spokesperson, Ngozi Braide, followed a tip-off from the officer-in-charge of the Special Anti-Robbery Squad, Ikeja, Abba Kyari, that one of the suspects, Jamiu Adeleke, was at the verge of selling a human hand for N21,000.

The operatives, according to Braide, who paraded the suspects before newsmen, stormed Owode town, Ogun State, where Adeleke was arrested while attempting to sell the human hand to a buyer.

She said: 'Adeleke confessed that one Sanni Kazeem sold it to him for N6,000. When Sanni was arrested, he also confessed to the crime, adding that he had supplied two human heads to a dealer named Akinwowo Fatai (30), who was also arrested.

Akinwowo, on his part, confessed to have received the human heads and another four human heads from another supplier, one Agboola Kolawole (40), who was later arrested in the same Owode town.'

Sources of 'goods'
'Kolawole confessed that he cut the heads of his two late brothers and two late sisters buried in private graves in their compound and sold them for N8,000 each. The final buyer/receiver, one Ajibade Rafiu (30), a herbalist, was also arrested.

'During interrogation, the suppliers said they got their human parts from various grave yards in Ogun State, while the middlemen doubled the prices and sell to the herbalist, who is the end user.

'Sanni Kazeem also confessed that two popular Alhajis in the same Owode town had bought one head from him before and also requested for a live human being for N40,000.'

She added that the first suspect arrested, Adeleke, jumped out of a moving vehicle in his attempt to escape and sustained fatal injuries, which later resulted in his death, adding that effort was still on to arrest others indicted in the business.

'Am in it for school fees'
One of the suspects, Agboola Kolawole, said: 'Yes, I sold my dead siblings parts for N8,000 each. I was tempted to do that because of poverty and inability to pay my children's school fees.

'Just as I was thinking of how to pay their school fees, a friend approached me and asked why I should be suffering when there was a way out. When I asked how, he said I should go and get some human parts that he would pay me.

'That was how I went to my late brother's grave at night, exhumed the bodies of two of them and cut off the heads.

'When I took them to the friend, he gave me N16,000 and told me to get him four hands. This time around, I went to my late sisters graves and cut off their hands. I was paid N8,000 for a set of hands.'

Kazeem Sanni said he usually went to cemeteries to exhume dead bodies and cut off the needed parts.

He said: 'The cemetery I usually frequent is CMS. I usually go there at night when the guards would have slept.

'I sell skull for N8,000 to Alpha Jamiu (Muslim cleric). So far, I have gone to the cemetery thrice to cut off human parts.

'Two weeks ago, he called to say that his clients needed a human being, promising to pay me N40,000. When I asked him how that was possible, he said he would give me a charm that would hypnotise the victim to facilitate his/her abduction.

'I told him I would think about it. But I never went back to him again because I felt I could not do that.'

However, it was gathered that Alpha Jamiu, the middleman, pays the supplier N8,000 but sells the parts thrice the amount to end users.

The herbalist, Ajibade Rafiu, told journalists that he bought a human head for N8,000, with an intention to prepare a fortification concoction for himself.

He said: 'I burnt the human head and later ground it, poured it inside a plastic and added local gin and other roots. I prepared the concoction for myself.

'It is to fortify me against any attack because in this job if you are not fortified people may attempt to throw spiritual arrows at you. But with this, if anybody tries it, it will backfire.'