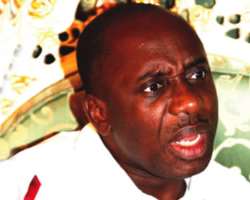 CURRENT political crisis rocking Rivers State, one of the major oil and gas states in Southern Nigeria, took a turn for the worse on Wednesday, with Rivers Peoples Assembly, a mass civil society movement, galvanising
10,000 men, women, and youths to demand for the resignation of Governor Chibuike Amaechi.

Since the crisis erupted last April, the Amaechi Administration has been accusing Abuja of subverting the state for narrow political interest. The Presidency has persistently denied that President Goodluck Jonathan has no hand in the ”mess” in Rivers.

Before now, Amaechi has been locked in a legal dispute with Jonathan, for ceding some of their gushing oil wells in the Soku axis of the Atlantic Ocean to Bayelsa State, the president’s home state.

The widely alleged Vice Presidential ambition of Amaechi in 2015, appeared to be the last straw that has brought matters to this stage.

Security was unusual tight around the Government House, Port Harcourt as Anti-Terrorist Squad of the Nigeria Police, Armoured Personnel Carriers were massively deployed to ensure that the anti-Amaechi march does not take over the seat of power in the state.

Our roving correspondent who drove around the Government House gate, reports that Governor Amaechi and public officials in there were literally being held hostage by the heavy presence of the armed security forces.

One of the star figures who was being expected in the state to boost the protest march was former Niger Delta freedom fighter, Ateke Tom. Ateke hails from Okrika, one of the Ijaw major clans, the country home of President Jonathan’s wife, Dame Patience.

As Jonathan’s in-law therefore, organisers of the march which is expected to be like the Arab Spring, say Ateke has every right to fight any political foe on the way of his in-law.

The Port Harcourt 10,000-man march is calling on the Economic and Financial Crime Commission (EFCC) to probe all financial dealings in the state under Amaechi watch. They alleged that a total of N1.6 trillion has flowed into the state since Amaechi took over power from his cousin, Celestine Omehia in 2007.

They are also interested in knowing the whereabouts of the state’s two aircrafts the Peter Odili Administration left behind. They equally want Amaechi to clear the puzzle surrounding the registration of the state aircraft which Abuja says is tainted with ”fraud”.

The organisers were full of praises for the security agencies operating in the state for maintaining law and order ”even in the face of extreme provocation by agents of the Rivers State Government”.

We, however, gathered that the protesters obtained a valid security permit to embark on the march. They were also armed with financial documents from the Office of the Accountant-General of the Federation.

Wherever such documents came from clearly showed that there is more to what is brewing in Rivers than what is manifesting so far. Simply put, the current political conflict is deep, and not likely to end in a short-term reconciliation.

The worse hit in the unfolding sordid political drama is the peoples of Rivers, the deprived, the oppressed, and the repressed who have no access
to the public till.