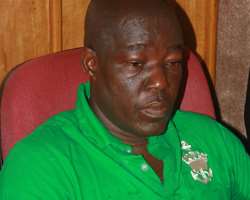 SAN FRANCISCO, May 22, (THEWILL) – The Economic and Financial Crimes Commission, EFCC, on May 20, 2013 arraigned one Monday Agha before Justice Maureen Adaobi Onyetenu of the Federal High Court Abakaliki, Ebonyi State, on an 8-count charge of obtaining money under false pretence.


The suspect who was investigated by the Enugu Zonal office of the EFCC is alleged to have fraudulently opened several accounts in different banks using fictitious names with which he conspired with one Moses to defraud some persons of the sum of N515, 000.


One of the charge against the accused reads: “that you Agha Monday (a.k.a Nwachukwu Peter Elom), Elder Emmanuel Elom, (at large) Obinna Chijioke (at large) Agatha Chigbata Munachi (at large) Anthonia C. Nwigwe (at large) Hon. P. A. Odonio (at large) sometime between December 2010 to April 2011 in Ebonyi State, within the jurisdiction of the Federal High Court of Nigeria, Abakaliki with intent to defraud, obtained the sum of five hundred and fifteen thousand naira (N515,000.00) from Chinyere Bright through Oceanic Bank (now Eco Bank) account number 0190001034503 of Nwachukwu Peter Elom by false pretence that the said Chinyere Bright has been awarded a contract for the printing and supply of 25,000 pieces of polo tops by the Government of Ebonyi State and the said money is for mobilisation and processing of the said contract, which pretence you knew to be false and thereby committed an offence contrary to section 1(1)(a) of Advance Fee Fraud and other fraud Related Offences Act,2006 and punishable under section 1(3)of the same Act”.


When the charge was read to the accused, he pleaded not guilty. The accused however told the court that he had not legal representation because he was unable to contact his lawyer.

The prosecution counsel, Johnson Ojogbane asked the court to fix a date for trial and remand the accused in prison.


The court adjourned the case to July 10, 2013 for hearing and ordered that the accused be remanded in prison custody.


Agha a serial offender is also standing trial at the Federal High Court Enugu for allegedly defrauding one Dr. Paul O. Ezema of the Department of Physics and Astronomy, University of Nigeria of the sum of eight hundred and five thousand naira.