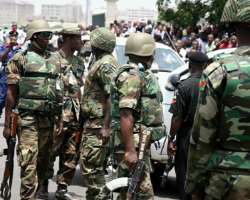 SAN FRANCISCO, May 21, (THEWILL) – Officers and men of the Joint Task Force (JTF) of the 19 Battalion of the Nigerian Army, codenamed Operation Pulo Shield, operating in Koko, the headquarters of Warri North Local Government Area of Delta State, have arrested 11 teenagers said to be involved in cult-related activities.

Six other suspects, accused of having a hand in the abduction of a former staff of Chevron Nigerian Limited in Sapele, Sapele Council area of the state, have also been arrested.

Four others were also nabbed over crude oil theft in the Koko waterways.

Disclosing the developments on Monday was the Commanding Officer, 19 Battalion of the Nigerian Army in Koko, Lt. Col Frank Etim, while parading some of the suspects before newsmen.

According to Etim, the teenage cultists, who are secondary school students, were recruited as foot-soldiers and informants by suspected armed robbers and kidnappers in the area.

He disclosed that the teenagers confessed to having been initiated into cultism by some group of boys, one of them in his late 30s who claim to have retired from cultism but still have a way of initiating minors who subsequently pay dues to him.

Etim said the boys, who also confessed to belonging to cult groups such as Cage Bird, Blue Sparrow and Dan Sailor, were arrested in a remote area of Sapele and Elume community.

The JTF Commander added that two suspects were also arrested at Jesse in Ethiope West LGA with a Volvo car with registration number Delta AM 475 SAP loaded with 18x50 litres empty jerry cans suspected to be moving to the illegal loading point along PPMC pipeline in Jesse area.

Etim said two others person were arrested with a truck with registration number Edo EXP 223 XA loaded with 45 drums of product suspected to be illegally refined AGO and 7x200 litres of empty drums.

He recalled that his men had, on May 17, arrested six suspects in connection with the abduction of a retired Chevron staff in Sapele, Mr Austin Eyen.

Etim said the suspects were traced to a forest in Oviri-court where were later arrested after an exchange of gunfire with soldiers who also recovered some weapons from them. He disclosed that the shrine of a native doctor who prepared protective charms for the suspects was also set ablaze during the operation.