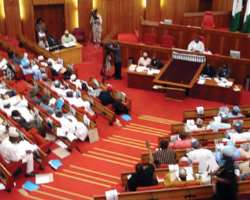 ABUJA, May 21, (THEWILL) – An upbeat Senate on Tuesday unanimously endorsed the declaration of state of emergency in the North Eastern states of Borno, Yobe and Adamawa by President Goodluck Jonathan without any dissenting voice. There was no debate.

There had been fears that the opposition senators, particularly of the Action Congress of Nigeria (ACN), would oppose the declaration.

But rising from a one-hour executive session, the senators, in a voice vote, endorsed the declaration, which request was contained in a letter to the senate by President Jonathan.

Nonetheless, the President of the Senate, David Mark, declared that the military option was not the final solution to end the insurgency, which has pitted the Federal Government against the Islamist extremist in many parts of northern Nigeria.

He advised the government to adopt the “carrot and stick policy” approach to ensure that the insurgency is brought to a logical conclusion as quickly as possible.

Mark had earlier read the letter from Jonathan seeking Senate’s approval for the state of emergency earlier declared in the three states.

One hundred out of 109 Senators attended the Tuesday’s executive session.

Section 305 (2) and (6) of the 1999 Constitution (as amended) provides that such proclamation (emergency rule) by the president and Commander-in-Chief must be endorsed by two third majority of the Senate which translates to 72 of the 109 members of the Senators in plenary. Mark said the nine Senators who were absent were out on “essential duties”.

For emphasis, Mark reiterated that all democratic structures in the affected states must be left intact and allowed to operate fully and actively during the emergency rule period. The elected state officials, he added, must be involved in all efforts by the Federal Government to end the insurgency.

According to Mark, “In the close session, we extensively discussed some of the issues we think are very important to this proclamation of state of emergency. We want to emphasis emphatically that all democratic structures must be left in place and they must be allowed to operate fully and actively and they must also be involved in all the efforts that the Federal Government is putting up to bring this ugly situation to an end.

“We would also like to emphasise that the armed forces are issued a proper code of conduct where they should be humane and benevolent and make sure that all citizens are treated with utmost respect so that they do not lose their respect as human beings.

“We want to encourage the government to also urge the committee on amnesty to work alongside the current functions that are put in place to bring this to an end so that at the end of the day, government can concentrate on their efforts to win the minds and hearts of the people in all the states that are affected.

“ We are conscious of the fact that there was lawlessness; there was anarchy and mayhem in most of the places that are involved in the declaration of state of emergency and we appreciate the fact that government must take every possible step to bring this to an end as quickly as possible with minimal loss of lives and property and material.