ELDER Statesman and former Minister of Information, Chief Edwin Clark said yesterday that the Southern part of the country would still produce President in 2015 election, adding that it was not yet the turn of the north.

He also said the intrigues of power shift from the south in 2015 was improper at this period of the country's march to nationhood.

Clark who said this at the third conference of the Southern Nigeria Peoples Assembly, noted that the constitution was clear on the number of terms that every president can contest.

He further said the people of South-South believe that the return of President Goodluck Jonathan in 2015 would mean well for the unity of Nigeria.

His words: 'The South-South believe that it is in the interest of Nigeria and the unity of our country that Jonathan should contest and no one should shut him out. Movement of power or power rotation is not proper at this time. In the constitution of Nigeria, every president has two elections to be contested. Shagari did it in 1979 and 1983.

'In 1999 Obasanjo did it and 2003. In 2007 Umaru Yar'Adua of blessed memory did it and if he had remained alive he would have done it again in 2011, so Jonathan is not a different person, He's a Nigerian and he has the right to contest again.'

He further said that the country belongs to all citizens, noting that there is nobody that owns or has stake in the country more than others.

'Nigeria belong to all of us and there is nobody who is superior to another. If you are talking about peace, peace for who? There is an incumbent who has not done a second term, so northerners have no place. It is not yet the turn of a northerner. They have the right to contest as Nigerians, yes, in other parties'. 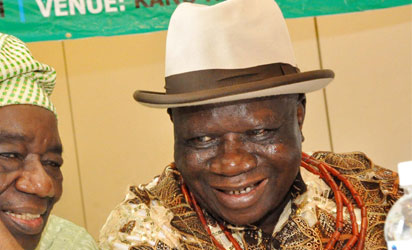 *Chief Edwin Clark
Continuing, Clark  said, 'So, if a northerner does not rule this country, there won't be peace? They have ruled for over 38 years, we have only ruled from the south for less than 14 years. When Lord Lugard united this country, he didn't say the north is superior to the south, we are all equal in this country, and anybody can aspire to the highest position in this country, so nobody has the prerogative to rule others.'

In addition, he said, 'having noted the negative effects of our divisiveness it is important that we clearly define the fundamental objective of our coming together which is to expand trust, solidarity, shared commonality and commit ourselves wholly to uniting our people for our common good.

'In our efforts to build an enduring legacy of one united family for the first time in the almost 100 years of our existence as a country, let us deliberately cultivate and imbue in members of our generation and beyond the attributes of tolerance and love for one another.

There can be no alternative to building a loving family because love is the fulcrum of survival and life. A house where love flourishes will usually resolve issues that cause disaffection and disharmony internally. Outsiders are regarded as pariahs.

'As earlier noted our inability to act as one concentric and impermeable family provided the leeway for the North to undermine and exploit us. The inexplicable outcome was that the North successfully pummeled us to endorse their leadership of the country for 38 years compared to the 14+ years the South has ruled the country.

'Today, all we hear on daily basis is that power must return to the North. Whether such hues and cries have the endorsement of Nigerians is left to be seen. We are nonetheless encouraged by our renewed solidarity and shared commonality to say that as people who have consistently been driven by the thrust of equity, justice and fairness, we must seek to balance the observed disparity in the leadership paradigm.

Consequently, we are inclined to state that power shift culminating in the transfer of the presidency to anywhere outside the confines of the southern hemisphere would be an aberration this Assembly should not endorse. It may perhaps be apposite for anybody holding a contrary view to say so now.''

Similarly, former Governor of Bayelsa State, Chief Dipriye Alamieyeseigha, stated that there was no vacancy in Aso Rock, saying that President Jonathan will remain the Commander-in-Chief beyond 2015.

Alamieyeseigha said: 'Aso Rock is not vacant. The northern agitators will all at the appropriate time join the moving train. They may have their opinion but I can assure you that President Jonathan will remain as the President of the Federal Republic of Nigeria, come 2015â€³.

Speaking on the presidential pardon granted to him by the Council of State, Alamieyeseigha said it was a negotiated deal and that it is in order. It started during Late President Yar'Adua.

He said: 'It was a pardon that was negotiated. This pardon was negotiated and if I fulfil my own part of the bargain, why shouldn't the Federal Government fulfills its part? People who don't know what happened are the ones talking. But if I opened my mouth, those who are talking will keep quiet.

He said: 'President Goodluck Jonathan was part of the negotiating team. There is no person in this country that knows issues surrounding Alamieyeseigha better than Mr President. He was my deputy governor and all that transpired were known to him. I'm already writing my memoir. At the appropriate time, you will know.'

Asked whether late President Yar' Adua was privy to the pardon, he said, 'without Yar'Adua, I would have died by now. Otherwise they would have even killed me. The person behind it is somebody all of you know. Somebody used the phrase, Oga at the top. You know him and he will be exposed at the right time.'

Gbonigi calls for national dialogue
Also speaking, Convener of Yoruba Unity Forum,YUF, Bishop Bolanle Gbonigi said: 'we must also continue to emphasize that the ending of the insurgency in the North will not by itself alone bring a sustainable' peace to our country. There are many other centres of simmering discontent across our nation, many of which have the potential to burst out as open rebellions if the causes of their grievances are not addressed. This is why an all embracing national dialogue, or a National Conference, has become an imperative. Further delay on this issue may turn out to be very expansive.'

Accordingly, Gbonigi said, 'On the cankerworm of corruption, we believe that the President needs some help from us because the problems of reducing the vice go beyond the lack of executive will and extend to the attitudes of the Judiciary and the Bar.

'In this connection, we urge this conference to recommend to the President, the setting up of a National Advisory Committee on the eradication of corruption. Such a committee should be chaired by a prominent Nigerian of integrity with good legal background and consist of senior members of the Bench and the Bar, representatives of the legislature, labour, religious leaders and some highly principled Nigerians of transparent integrity. Its main term of reference will be to advise the President on urgent measures that must be taken to give credibility to our national effort to cleanse the Augean stable of corruption.''

In additiion, he said, 'Distinguished delegates, equally threatening the peace and stability of our country is the prevailing harsh economic climate.

The level of unemployment particularly graduate unemployment in our country has reached an alarming level unprecedented in the history of Nigeria and governments appear helpless.

'Graduate unemployment is dangerous. It is anti-development and prevents our country from reaping the benefits of the huge investment of our commonwealth on these young Nigerians. Governments' intervention in the unemployment market has always been to expand the overbloated civil service by employing more hands into the service'.

'The result is that a greater percentage of our annual budget is spent on recurrent items such as personnel costs leaving very little for infrastructural development and other capital expenditure. Governments must begin to create jobs that are sustainable and not tied to the apron strings of budgets.

The elder statesman also noted that, 'Government's programme to open up the power sector is a welcome development. It is hoped that the completion of the ongoing power projects in the country will lead to a significant improvement in power supply to the industries still operating in the country, particularly the Small and Medium Scale Enterprises, SMEs, and enhance the development of new industries.

We strongly recommend that this Conference should adopt this position. Secondly, we believe that our organisation should indeed strive to promote harmony within various groups and individuals in our territorial extent who are engaged in one form of conflict or the other that can threaten the aims and objectives of our existence.''