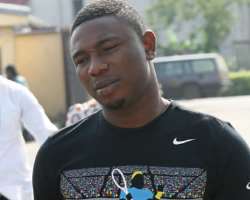 The defendant is a member of a syndicate of internet fraudsters who have defrauded innocent victims of valuables. Orimogunje severally portrayed himself as a Nigerian Police Officer; Chief Justice of Nigeria and Managing Director of Zenith Bank Plc to dupe his victims abroad. In the process, he reportedly raked in N4, 000,000 (Four Million Naira).

Count one of the charge reads, “that you, Orimogunje on or about the 24th day of December 2012, at Lagos within the Ikeja Judiciary Division knowingly made false documents titled “The Nigeria Police – Scam Report” with intent that it may be used or acted on as genuine to the prejudice of one Mrs. Andreas Nachtmann and one Mr. Andre Thys.

The judge adjourned the matter to December 10, 2013 for trial and ordered that the defendant be remanded in Ikoyi prison pending the perfection of his bail conditions.