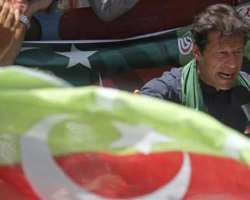 Cricket hero Imran Khan's Pakistan Tehrik-i-Insaf party won a revote in an upmarket constituency of Karachi on Sunday, unofficial results showed, a day after gunmen killed a party leader, setting the stage for protests and counter-protests.

Khan blamed the killing of Zara Shahid Hussain on the Muttahida Quami Movement (MQM) party, which has a stranglehold on the city. Furious MQM leaders denied responsibility, condemned the killing and demanded a retraction from Khan.

The attack in the upscale Defense area, the family neighborhood of assassinated former prime minister Benazir Bhutto, capped a bloody election campaign in which around 150 people were killed nationwide.

The May 11 general elections handed a landslide victory to opposition leader Nawaz Sharif and his Pakistan Muslim League-Nawaz (PML-N). Imran's campaign electrified many Pakistanis, pushing the PTI from a marginal party to Pakistan's third largest.

But results from a handful of constituencies across the country are still uncertain amid accusations of vote-rigging. There is re-polling in a few others where security issues prevented voting.

Last week's election gave the MQM 18 of 19 national assembly seats in Karachi. Now the PTI has one seat, according to unofficial results.

Both the MQM, angry at the accusations, and the PTI have called for protests on Monday which often turn violent in Karachi, Pakistan's biggest city. Karachi generates around half of the government's revenue and stability in the city is key to stability of the whole country.

Police said that two gunmen shot Hussain on Saturday outside her home in Defense.

"I hold (MQM leader) Altaf Hussain directly responsible for the murder as he openly threatened PTI workers and leaders through public broadcasts," Khan, recovering in hospital from a fall during campaigning, said in a tweet.

"I also hold the British government responsible as I had warned them about British citizen Altaf Hussain after his open threats."

Altaf Hussain is accused of murder in Pakistan and leads his party remotely from exile in England. His party is designated a terrorist organization by Canada, a charge it strongly denies.

In recent days, he gave a speech which many Pakistanis felt was an incitement to attack political rivals. British police are investigating whether or not it constituted a hate speech.

Karachi, the nuclear-armed country's key port, is home to 18 million people. It typically sees about a dozen murders a day, a combination of political killings, attacks by the Pakistan Taliban and sectarian militant groups, and street crime.