State Of Emergency In Borno, Yobe, Adamawa May Affect Prices Of Livestock, Others 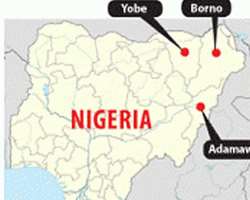 
SAN FRANCISCO, May 19, (THEWILL) - Indications have emerged that the declaration of state of emergency in Adamawa, Borno and Yobe States by President Goodluck Jonathan may affect the supply of food items and other agricultural produce from the area to other parts of the country.


Already, there are fears that the prices of beef and smoked fish may soon hit the skies across the country as the nation's major suppliers in Maiduguri, the Borno State capital, have been shut down by the ongoing military onslaught against Boko Haram.


The situation has also even been compounded by the total curfew imposed on areas such as Kasuwan Shanu considered as the major suppliers of the nation's cow and Baga road which is the main supply hub for smoked fish.


Residents of Maiduguri are already feeling the impact as they have been shut out from the rest of the country with major roads into the town inaccessible to motorists because of the curfew just as all the services of the GSM network operators have been shut down by the military since Thursday. â€¨â€¨â€¨


THEWILL reliably gathered that the blockade of roads by men of Joint Task Force (JTF) in Maiduguri have caused the non-supplies of vegetables and other essential food items such as fruits, milk and eggs to markets in the area.


Vegetables and other essential food items are supplied from the outskirts of the metropolis, from Damboa, Lake Chad Basin Areas, Jos and Baga, that was recently attacked by the Boko Haram insurgents on April 16 with destruction to many lives and property. â€¨â€¨


The scarcity of vegetables, milk and eggs, have shot up the prices with prices of the essentials going up as much as 100 per cent at the major markets in the town on Sunday. â€¨â€¨


A military source told THEWILL that the closure of roads leading into Maiduguri and the cut off of phone lines, is to allow for the easy crackdown of fleeing insurgents from the camps currently being bombarded. â€¨â€¨


Unconfirmed report however said some residents living in the borders towns of Gamboru/Ngala and Banki, on Sunday, apparently apprehensive of what may befall them with the clampdown of the insurgents eating deeper by the day, have started fleeing alongside terrorists to the neigbouring Chad and Cameroon in droves. â€¨â€¨