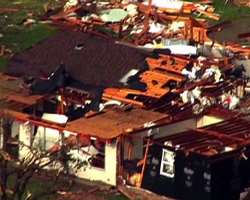 At least one person was killed and around a dozen injured Sunday when a string of tornadoes tore through four states, ripping roofs off homes, downing power lines and tossing trees like matchsticks.

The death happened at a trailer park in Pottawatomie County, Oklahoma, said Sheriff Mike Booth. He had no details, other than that the deceased was an adult male.

Booth said that two others are missing from that same park, where a number of people were also injured, two seriously.

Rescue crews were picking through the mangled metal remains of mobile homes as darkness fell Sunday.

As many as 26 tornadoes were reported in Oklahoma, Kansas, Illinois and Iowa, according to the National Weather Service, with Oklahoma and Kansas being the hardest hit. Some of those reports might have been of the same tornado.

One tornado touched down near Wellston, Oklahoma, taking out power lines and damaging several homes, according to video from CNN affiliate KFOR. The affiliate's helicopter pilot estimated the funnel cloud to be about a half-mile wide.

"It's tearing up everything," the pilot said. "Just ripping everything up in its sight."

Aerial video from KFOR and CNN affiliate KOCO showed severe damage near Wellston and near Carney, Oklahoma. Roofs were ripped from homes, branches stripped from trees and roads were filled with debris.

Tornadoes were also reported east of Dale, west of Paden, and near Prague in Oklahoma.

Part of Interstate 40 in Shawnee, Oklahoma, was shut down in both directions Sunday night after a tornado touched down there, overturning multiple tractor-trailers.

Eleven patients were being treated at St. Anthony Shawnee Hospital in Shawnee, Oklahoma, said spokeswoman Carla Tollett. Ten were not critical and will be released, while one remains in critical condition, she said.

Still more tornadoes were spotted in Iowa, near Earlham, Huxley and east of Dallas Center, according to the weather service.

It did not mince words, telling people to take cover there, as elsewhere.

"You could be killed if not underground or in a tornado shelter. Complete destruction of neighborhoods, businesses and vehicles will occur. Flying debris will be deadly to people and animals," it said in a Kansas advisory.

The twisters are part of a severe weather outbreak that is sweeping through the region as storms move east.

Baseball-sized hail, wind gusts and tornadoes are threatening to pummel parts of the central Plains and Midwest through Monday.

"We still have a couple of active cells, and so we don't know for sure that it's over yet," said Jerry Lojka with the Oklahoma Department of Emergency Management.

Beyond the Midwest, other areas saw severe weather on Sunday. In Atlanta, serious flooding was reported amid storms producing heavy rainfall.

Kansas
The surface front may stall on Monday, leading to showers and thunderstorms through the day. Localized heavy rainfall may lead to the need for flood watches and warnings.

Oklahoma
There is a threat for strong storms in the late afternoon. With the heavy rain that will occur through the weekend, flooding could become a problem Monday night.

Iowa
Showers and storms are expected to develop on Monday afternoon. Large hail is possible and though the tornado threat looks low, it cannot be ruled out.