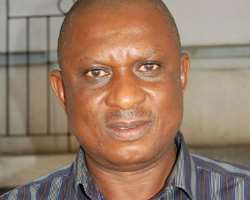 SAN FRANCISCO, May 17, (THEWILL) – The Economic and Financial Crimes Commission on Thursday May 16, 2013 arraigned one Justice Amadi Nsirim before Justice U.N Agomoh of the Federal High Court, Port Harcourt on a 2- count charge bordering on conspiracy and obtaining money under false pretence.

When the charges were read to the accused person, he pleaded not guilty.

One of the charge reads: “that you Justice Amadi Nsirim and one Humphrey Amadi now at large on or about the 15th of September, 2011 at Port Harcourt judicial division with intent to defraud, induced one Solomon Egbo to pay the sum of N10,440,000.00 (Ten Million and Four Hundred and Forty Thousand Naira) under the false pretence of selling to him a building and an adjourning plot of land situate at No. 80 Igwurutu Road by Rumuokwurusi Road, Port Harcourt under the pretext that the said building and adjourning land belong to you, Justice Amadi Nsirim and Humphrey (now at large) respectively, a representation you knew to be false and thereby committed an offence contrary to section 1(1)(b) and punishable under section 1(3) of the Advance Fee Fraud and Other Fraud Related Offences Act, 2006”.

A press statement from the EFCC revealed that Justice Agomoh granted the accused bail in the sum of N1, 000,000.00 (One Million Naira) and two sureties in like sum who must reside within the jurisdiction of court.