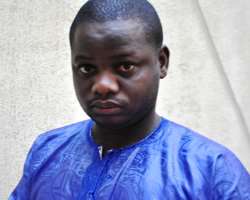 
The accused was alleged to have sold allocation papers of plots of land at Kuje Area Council to one Winifred Affi Okon and ten others who collectively paid him the sum total of N8, 665,000 (Eight Million, Six Hundred and Sixty Five Thousand Naira ) only for the accused to disappear for six months without giving them the said documents.


One of the charge reads: “that you, Kenneth Agbande (a.k.a) Abdulkarim Buba ‘M’ sometime in 2011 at Abuja, within the judicial division of this Honourable Court did obtain the sum of N1, 200,000.00 (One Million, Two Hundred Thousand Naira) from one Winifred Affi Okon under the false pretence that you would deliver to him an allocation of a vacant 10 plots of land at No. B82, AA4 Extension Layout, Kuje, Abuja and thereby committed an offence contrary to section 1(1) (a) of the Advance Fee Fraud and other Fraud Related Offences Act, 2006 and punishable under section 1 (3) of the same Act”.


The accused pleaded not guilty to the charge when read to him.


In view of the plea, the prosecution counsel, Andrew Akoja asked for a date to commence trial but the defence counsel Kelvin .E. Okoko prayed the court to grant the accused bail as he was already on administrative bail offered by the EFCC.


Justice Olarenwaju granted bail to the accused in the sum of N500, 000 with two sureties who must not only be residents of the Federal Capital Territory but civil servants of not less than level 12 in the Federal Civil Service or any of its parastatals.