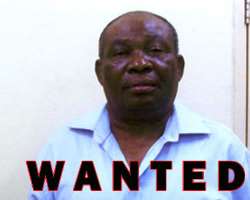 SAN FRANCISCO, May 16, (THEWILL) – The Economic and Financial Crimes Commission, EFCC has declared one Sylvanus Enonche Okoh (alias Anthony Nwabueze, Okpoju Olofu, and General) wanted. The serial scammer who is standing trial before a Federal Capital Territory High Court, Abuja on a 6-count charge that borders on obtaining N16million under false pretence, is wanted for failure to attend his trial.

The suspect who had been parading himself as a retired General in the Nigerian Army was arraigned on 1st June, 2012 on a six count charge of obtaining money under false pretence but was granted bail by the court on 27th July, 2012 and thereafter jumped bail.

The warrant issued by Justice M. Oniyangi of the Federal Capital Territory High Court for the accused and his surety could not been executed as their whereabouts remain unknown, a press statement by the EFCC has revealed.

Stout and dark complexioned, Sylvanus Okoh speaks Idoma, English and Hausa fluently. He is a notorious scammer who has duped several innocent Nigerians of their hard earned money through fraudulent business proposals and issuance of cloned title documents from the Abuja Geographical Information service, AGIS. The accused is also standing trial before Justice Abubakar Kutigi of the FCT High Court, Jabi for obtaining N90million under false pretence.

A few other cases are still being investigated by the EFCC in which the accused person is the prime suspect.

The Commission implores any one having useful information about the whereabouts of the Sylvanus Enonche Okoh to notify its offices in Abuja, Port Harcourt, Lagos, Gombe, Kano and Enugu; or report at the nearest police station.