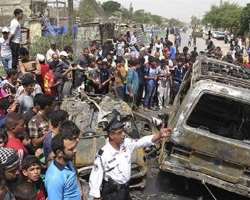 "When the explosion happened, it was chaos, people were running everywhere to evacuate the victims. I saw two bakery laborers who were completely burned," said Hussein Mahdi, a store owner, who was at the scene of one blast.

No group immediately claimed the responsibility for Thursday's explosions but Sunni Muslim insurgents and al-Qaeda' s Iraqi wing have increased their attacks since the beginning of this year to trigger a wider sectarian confrontation.

Bomb attacks in Shi'ite areas of Baghdad and in northern Iraq killed more than 35 people on Wednesday.

Tensions between minority Sunni Muslims and the Shi'ites who now lead Iraq are at their highest since U.S. troops pulled out in 2011 and the country's government split among Shi'ite, Sunni and ethnic Kurds is caught up in a crisis over power sharing.