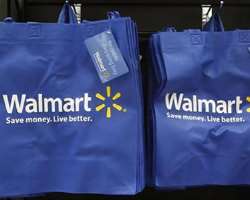 The company said it expected second-quarter same-store sales, excluding those of fuel, to be flat to up 2 percent at Walmart U.S. and up 1 percent to 3 percent at its Sam's Club warehouse store chain.