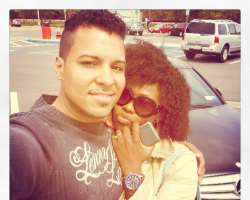 The marriage of star actress, Uche Jombo to her Puerto Rican hubby, Kenney Rodriguez is one today, Thursday, May 16, 2013. Exactly a year ago, the duo staged a secret wedding.

The wedding came barely weeks after the actress reportedly denied any marriage plans published by © 2013 Nollywoodgists.com.

Shortly after the secret wedding, Uche Jombo was faced with controversies. First, her fans were waiting for her wedding pictures which were later released after a month the wedding was held.

She also had to fight with another controversy of not returning to Nigeria in June with her hubby, but only had a wedding ring to flaunt at an event in Lagos to show that she is truly married.

Uche and her husband are presently in America.

From Nollywoodgists.com, we wish Uche Jombo and Kenney Rodriguez a happy wedding anniversary.