JAPAN, A SUBTLE BUT EFFECTIVE PARTNER FOR AFRICA 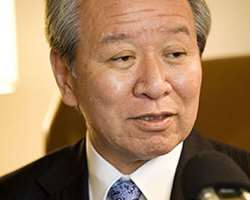 Africa’s continued growth has sparked the interest of investors from industrialized nations, resulting in fierce competition for its resources and markets. The aggressive economic expansion efforts by China and India, among others, come to mind. Japan, however, has been a subtle but effective partner of Africa for the past 50 years. Through its donor arm, the Japan International Cooperation Agency (JICA), it has given aid in the form of grants and loans and invested with its own distinct style based on local ownership, peace, governance and human rights. It also works with a wide range of international partners, including the UN, donors and the civil society, coordinating and implementing projects in the field.

Discreet diplomacy
The new head of JICA, Akihiko Tanaka, a former vice-president of the University of Tokyo, fits the role of the “discreet diplomat” to a tee. As an expert on international politics, he has a firm grasp of the issues. In an interview with Africa Renewal, he shared his enthusiasm for the visible progress that has been made in several African countries. His recent visits to Kenya, Tanzania, Mozambique, South Africa and Senegal left a lasting impression: “The international community has to praise Africa for its achievements. I am very much impressed.” Mr. Tanaka raved about the innovative ways in which farmers in Kenya are using mobile phones to check market prices. He spoke with conviction about the use of new technology in development, which he called “one area we need to pay attention to.” He added, “I see there is a dynamic change taking place, so I am very much hopeful that this current dynamism leads to sustainable growth.”

Formerly the world’s top donor to developing countries, Japan now holds fifth place.Although the decline has been steady over the years due to a prolonged depression of its economy, the tragic earthquake in Japan in 2011 also caused some cuts to official development assistance (ODA). Nevertheless, not only was Africa spared, but its share of ODA has increased over the years. Furthermore, Japanese foreign minister Fumio Kishida announced at a ministerial meetingin Ethiopia in March that his country would provide an additional $550 million in new aid, according toDeutsche Welle, a German international broadcaster. The meeting was a preparatory session for the Fifth Tokyo International Conference on African Development, or TICAD, to be held in Japan in June.

TICAD, Japan’s brainchild,was created in 1993 to encourage the international community to provide more support to Africa and developing nations. Tanaka’s predecessor, Sadako Ogata, played a huge role in shaping the forum. Under her direction, TICAD shifted strategies, from providing simple aid to encouraging inclusive development according to the characteristics of the local culture. JICA has adopted this approach as its “trademark.”

Mutual learning
Japan has taken a different approach from traditional donors, pursuing a mutual partnership rather than a donor-recipient relationship. JICA works beyond the simple exchange of technical expertise. “We [would like to] emphasize people-to-people cooperation,” explains Mr. Tanaka. “It is important to contribute large sums of money which would build the roads, dams and power stations, but in addition to this, we would like to emphasize collaborativework to improve health conditions, collaborativework to improve education and collaborative work to improve agricultural production.”

JICA also highlights the importance of mutual learning, or, as Mr. Tanaka calls it, “learning how to learn.” For example, Japanese experts in Ethiopia work with the national experts to improve industrial production. “Japanese experts knew many things about Japan’s conditions or East Asia’s conditions but didn’t know much about Ethiopian features.” By mutual sharing of techniques, experiences and know-how they get the job done. The same is being done in the area of agricultural research: African and Japanese experts work together on improving crops using techniques best suited to local conditions. “It’s not just between Japanese and Africans, it is amongst people from one African country to another,” emphasized Mr. Tanaka, citing the example of a nursing school in Senegal where neighbouring countries send their health workers to be trained.

The collaboration between Japan and Brazil is another illustration of how JICA’s mutual-learning approach works. The agency played a decisive role in the transformation of Brazil’s savannah region, known as the Cerrado, from a wasteland to a global breadbasket. Now this model is being replicated in Mozambique. Mr. Tanaka underscores that it is not a one-size-fits-all approach, adding that simply copying a technique from one area in another doesn’t work. Mozambique has similarities to Brazil regarding its climate and soil conditions, but it has major differences too, like the fact that Mozambique has witnessed a long civil war. Mr. Tanaka argues that many factors need to be considered by those who wish to apply the experience gained from Brazil. “Learning is more than copying. Learning is a process of using your thinking and utilizing your own experiences to innovate new approaches and solutions by combining with other experiences.”

Mr. Tanaka also believes that Japan can learn from Africa, and so can the rich nations. “The North is no longer the sole solution provider to the South. It is rapidly becoming irrelevant.” He points out that so-called developing countries such as Kenya are innovating in ways that developed countries never considered.

Trading with Africa
In light of the new scramble for Africa, involving not only foreign investors from the developed world but also emerging economies like Brazil and China, Japan might be reconsidering its relations with Africa. Mr. Tanaka’s agency will need to find a way to help Japanese companies enter business with the continent. Japan already has a foot in the door, having been present in Africa for much longer than any of the continent’s recent partners.

However, Mr. Tanaka warns that growth in Africa is not sustainable if threats to human security are not addressed. The concept of human security has been at the heart of Japan’s foreign aid policy. People need to live safely and in dignity, he insists. Countries need to tackle poverty, inequality, joblessness and other social ills to decrease sympathy with armed rebels. “It’s OK to depend on commodities for growth at this moment, but then, utilizing the resources or funds derived from commodities, you need to cultivate and develop areas where human security is threatened.”

Preserving peace and prosperity has been a longstanding priority for Japan too. The devastation after WorldWar II left an indelible mark on the country, but Japan knows from experience the importance of economic reconstruction and development on people’s lives. This is why it has poured a lot of money into peace-building and disarmament efforts. Civil wars and interstate wars are no longer the trend in Africa, and market economies and democratic governance are the change that is happening, Mr. Tanaka concludes. “We admire the current dynamic development of Africa, and we would like to share this dynamism together through a mutual learning process.”