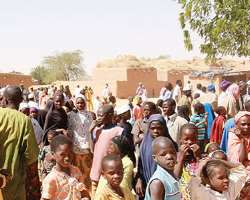 While the world remains focused on ending Mali’s conflict following rebel incursions into the northern part of the country early last year, there are about 400,000 Malian children facing severe disruptions in their education, warns the UN Children’s Fund, UNICEF. The fund and other aid agencies need $18 million to reverse the situation. So far, donor response has been poor, says IRIN, a UN humanitarian news service. As of March, UNICEF has been able to raise only $3 million, creating panic among aid agencies.

“Most of the donors have drawn back after the [2012] crisis - we are still trying to mobilize as much funding as possible,” Euphrates Gobina, the head of education at UNICEF in Mali told IRIN. The real problem is that donors are far more concerned about life-saving issues than they are about health and education, adds IRIN.

According to Lori Heninger, the director of the Inter-Agency Network for Education in Emergencies, which helps coordinate non-profits providing education in conflict areas, parents are the ones mostly asking for interventions in education. She describes as “pretty abysmal” last year’s 0.9% devoted to education from the humanitarian budget.

Mali’s government has been too preoccupied with the rebellion to make any meaningful intervention. Maiga Dramane, head of basic education at the education ministry says the lack of education was having enormous psychological impact on the children.

Most of the displaced children are from northern Mali, the region hit hardest by the rebellion. Even before the rebel invasion, teachers in the towns of Gao, Kidal and Timbuktu were on strike for better service conditions. When the Islamist rebels took over a swath of northern Mali, they also declared Sharia law and were set to introduce Qur’anic schools, which require boys and girls to attend separate classes.

Teachers, parents and pupils had to flee to the south and now expect UNICEF and other charity organizations to help rescue children’s education. “When a teacher is afraid to teach and when a student is afraid to go to school, the whole education is at risk,” said UNICEF’s Representative in Mali, Françoise Ackermans.

The agency is dispensing psychological support and mine awareness to students who were exposed to violence. But with the country still highly volatile, getting students back to school remains a huge challenge.