National Honours Palava: I Will Get Mine At The Appointed Time -Oge Okoye 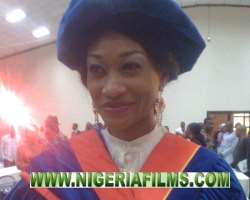 The Federal Government of Nigeria set up a programme many years back to constantly bestow national awards on some exemplary individuals in different fields of profession.

Not too many in Nollywood have been privileged to be part of the national awards, especially the younger generation of actors. The likes of Chinedu Ikedieze (Aki), Osita Iheme (Pawpaw), Genevieve Nnaji and Stephanie Okereke-Linus are the few contemporary movie stars who are holders of National Honours.

Some months ago, popular actress, Oge Okoye-Duru was honoured with a doctorate degree by an American university. While expressing her joy at being made a honourary doctor, the sexy screen diva disclosed that she would also be happy to bag a National award in Nigeria, but she was quick to add that the award would come at the appropriate time.

She told Nollywoodgists.com that, “I will welcome the idea of being given a National Award, but I am not in a hurry nor intimidated by my colleagues, who already have it. At the right time appointed by God, it would come.”

Holders of national honours sometimes get preferential treatments whenever they are in difficulty.

'TOP NOLLYWOOD LESBIANS OF ALL TIMES

I Am Not Afraid Of Rape--Omotola