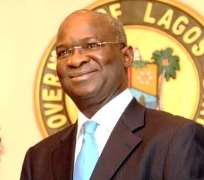 Nigeria has 36 federating states with one man atop the governance of each. I admire a few of them for their courage, diligence, forthrightness, hardwork, vision among other delectable traits and one of those is Lagos state governor Babatunde Raji Fashola, SAN.

We like(d) him because he obviously knows what it means to occupy a Government House. Also his grasp of such a complex city confirm that he knew what he set out to accomplish. In a number of instances, BRF has proven that he isn’t one of the many accidental public servants in the country. His beautification campaign, education and healthcare projects and markedly the restoration of sanity in hitherto black spots; prominent is the cleansing of Oshodi which till date amazes everyone.

I recollect Fashola’s address at the commissioning of the Cele Bridge on Oshodi-Apapa expressway. That day, he told everyone in attendance that he dreamt of constructing the link as a little boy. According to him, there used to be an improvised wooden bridge there decades ago and that some miscreants would demand for money before pedestrians were allowed passage. Saddened by the suffering, he promised himself to fix the situation once he has the clout to do so. The bridge erected at the cost of N1.1 billion is three years old.

In view of the above story and others, the thought that my hero would suddenly become insensitive to the plight of millions of struggling citizens is puzzling.

I arrived in Lagos from Abuja on the first day of May and I stayed for two weeks – busy weeks. It is the classic official trip where you hardly have time for personal parade. Usually when I’m in Lagos and have appointments on the Island (the highbrow places that is), I move round in a chattered cab. My chauffer is Mr. Amos, one of the many erstwhile fans of Fashola. As he took me to my destinations throughout the period, he brought me up to speed, narrating what the Centre of Excellence has become. He spoke of neglect in his area of Ndike/Obawole in Ifako-Ijaiye local government; the high-handedness of the many of the state-owned agencies; the bogus rates transporters are forced to pay et cetera. Amos further lamented the poor state of roads in many parts of the state including the prestigious Victoria Island and Ikoyi, his usual work-route.

Commenting on the issue of ‘Okada’, the hustling father of four, who although supported the ban, alleged that once it is time for elections at whatever level in the state, the administration systematically goes soft on the riders so as to garner their votes.

At a point during his complaint, one would think that the man was paid to castigate the helmsman of Lagos. To convince me his grouse was genuine, he cited instances as though foreseeing I would someday write about it. He added that judging by the present, more adversity await Lagosians, especially the common man. Days later, Amos prophecy came to be reality.

On May 12, I attended an event at Opebi area of Ikeja, the capital of Lagos. It ended around 9pm and unfortunately, there was no luxury of a private car on this occasion. I walked up to the entrance of Salvation Road, about a kilometer from the popular Adebola House. Within the next twenty minutes, only three buses stopped to offload and load waiting passengers. A glance showed we were about two dozen; a few others joined intermittently though. As the frustration grew, an elderly woman was the first to protest discernibly: “All these Keke dey strike?” she asked rhetorically. A middle-aged man in the crowd soon announced that the state government just banned tricycles from the many parts of the metropolis. Reacting, a stranded lady hissed with visible repugnance. She was worried that commuters are now at the mercy of lawless danfo drivers and hoodlums operating in non-public vehicles, disguised as Taxis. And so a public dialogue started; a bus-stop turned into one of the several agents of socialization.

In recent months, the goodwill Governor Fashola enjoys has been plummeting. This is the honest truth and his aides as well as government officials should be bold to voice out. In case they do not know, enjoying AC’d official cars, offices and millions in personal bank accounts yet ignoring the sorrows inflicted on Lagosians is a great disservice. But the questions is: In this type of clime, why would anyone leading a municipal of over twenty million people force tricycles out of districts that are not highways? Hasn’t Baba Fash successfully punctured the promise of a better welfare for the populace?

The governor has two vital years left on his contract and I wish he uses it wisely. He does not need a strategist to inform him that his policies henceforth will affect the decision of the electorate in 47 months; he does not need a soothsayer to predict that this latest order will part of the presupposition upon which hundreds of thousands of residents will decide whether (or not) to support his ‘All Progressives Congress’ platform in 2015.

A personal friend is of the view that the enormous accolades showered on Fashola over the years is probably making him feel cool and acting up; I cannot agree more. But then, one believes that the administration is fully aware that succor is what the people desired when they voted en masse in 2011, not untold hardship.