At Least 40 Killed In Another Attack In Benue Village 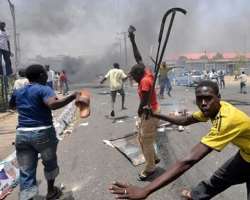 
About 700 hundred armed tribesmen from neighbouring Nasarawa State allegedly executed the raid which caught the town by surprise.


Residents of Agatu are mainly farmers and fishermen.


THEWILL gathered that most of the residents have since fled their homes for fear of further attacks. All the churches, market places, schools and government offices were shut on Monday.


Benue State Governor, Mr. Gabriel Suswam condemned the attack and described it as unwarranted. He appealed for calm while assuring the victims of government’s support.


The Benue State police command said it was yet to get ascertain the number of casualties.