Can The Youth Save Africa From Neo-Colonialism? 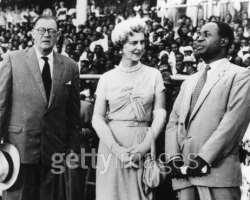 In his book, 'Neo-Colonialism The Last Stage of Imperialism', (page11) Nkrumah cautioned:

'So long as Africa remains divided, it will therefore be the wealthy consumer countries who will dictate the price of its resources'.

I told you so! This appears to be the bitterness boiling up in the hearts of many Pan-African revolutionaries across the world as Africa gradually sinks into the pit of poverty whiles resources are been taken for peanuts on a daily basis.

Today, the dangers of Neo-colonialism have become so evident in Africa to the point where no further explanation is necessary. Africa, a continent which claims to be independent has allowed herself to be ordered around, always dancing to the tune of foreign 'aid'. This is despite the fact that Dambisa Moyo, a Zambian economist and author of the book 'Dead Aid', has clearly demonstrated to our leaders that 'No nation has ever attained economic development by aid."

African leaders have over the years obeyed every instruction from the West, yet nothing has changed. We're still indebted to the World Bank and the IMF more than it was 20 year ago. In spite of this, the African leader is not ready to change the old ways of doing things.

'To allow a foreign country, especially one which is loaded with economic interests in our continent, to tell us what political courses to follow, is indeed for us to hand back our independence to the oppressor on a silver platter', (Kwame Nkrumah, 'Consciencism' pg.102).

The fact is, our founding fathers foresaw the dangers that come with our resolve to rely on the western world to solve all our problems for us. This problem has been compounded by the lack of unity among the African nations.

After 50years, this statement has become the sad truth. There is no African single raw material on the international market whose price is determined by any of our leaders. It is now evidently clear that many of our African leaders don't care whether the solutions to our economic challenges have been well-documented by the founding fathers or not.

It is therefore time for a revolution to seep aside these traitors for failing to act in our collective interest as African people.

A new generation of leadership is expected to rise up from among the youth with a determination to save mother Africa from the firm grip of neo-colonialism, political incompetence and corruption which is currently becoming the hallmark of modern African leadership.

Action Plan One: The Role Of the Youth
'Earlier in life, I had discovered that if you want something, you had better made some noise'. - Malcolm X

It is clear that Africa still remains under-developed because many of the youthful talents that can transform the continent have been ignored for far too long. Nevertheless, this is not a reason for them to give up. It is time for the youth to start making some noise else the status quo will never change. Gather yourselves in front of the parliament buildings and in front of the various African embassies. March in your numbers towards the the stations of the various TV networks.

Whiles you're there, continue to make noise and Rest Not until their voices are heard and your concerns addressed.

Finally, I therefore put forward action plan which must be followed in order to ensure that our search for a new generation of incorruptible leaders for the continent becomes a reality within the shortest possible time for the benefit of Mama Africa.

· The African youth must first organise in small groups and create the platforms for dialogue and exchange of ideas.

· The groups must identify and nominate highly incorruptible members as their leaders.

· The groups must have power to remove from office, leaders identified to be corrupt.

· Leaders of the various youth groups must link up and draw up a common agenda for the Youth Liberation Movement. All such agenda must focus on youth empowerment including a protest to remove the age-restricted political portfolios from our constitutions.

· The Youth Liberation Movement must remain vocal in their communities, highlighting the challenges of the youth on any given platform.

· It is ideal that the Youth Movement forms a political party solely dedicated to the needs of the youth.

· Leaders of the Youth Movement can thus venture into the political terrain and stand up for the right of the youth. We need more young ones in parliament.

· Where possible, no youth must vote for the old men but rather a candidate nominated from the political parties formed by the youth and dedicated to the youth.

If this is done, the youth can begin to make impact in African leadership and help wrestle power from the old men. It is time for the youth to begin ignoring the old men in elections and rather concentrate on such leaders born out of the Youth Revolutionary Movement who truly have the welfare of the youth at heart. This process if well implemented can help send a strong signal to the world that Africa is now ready for a new generation of revolutionary leaders dedicated to end corruption once and for all.

Honourable Saka
The writer is a Pan-African analyst and the founder of the Project Pan-Africa, an organisation established with the sole purpose of unlocking the minds of the African youth to take Africa's destiny into their hands. He can be reached on e-mail:[email protected]

Disclaimer: "The views/contents expressed in this article are the sole responsibility of the author(s) and do not necessarily reflect those of The Nigerian Voice. The Nigerian Voice will not be responsible or liable for any inaccurate or incorrect statements contained in this article."
Articles by Honourable Saka
5-7-2013  Ghana: A Shining Democracy Without Accountability14-6-2013  How Could Japan Offer $32billion In Aid To Africa?5-6-2013  Why Are African Professors Becoming Politicians?31-5-2013  Africa: The Testing Ground For Foreign Medicines25-5-2013  Special Message To The African Youth On Au DayMore...