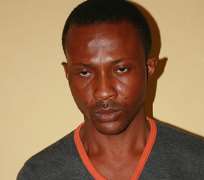 The victim was deceived through calls purportedly by a former acquaintance, Patrick Abah, a fellow she met during her National Youth Service orientation in 2009, into making the payments to enable her secure employment for her son with Shell Petroleum Company in Port Harcourt a statement by the EFCC said on Monday.

The supposed Patrick had asked if she would like to work with Shell in Port Harcourt as they were recruiting. Mary said she would like the job for her son and the fraudster promised to assist her through his in-law, Okoh Ayabaye, an Engineer with Shell. She was then asked to pay the sum of N830, 000.00 into two accounts: a First Bank account belonging to Okoh Ayabaye and a Diamond Bank account belonging to Alamabo Teneilabe.

It dawned on her that she had been duped when the job was not forthcoming after the payment had been made. Consequently, she petitioned the EFCC. The anti- graft agency launched its investigations which culminated in the arrest of one of the account owners, Alamabo Teneilabe.

Teneilabe however claimed he knew nothing about the fraud. He said he only gave his number to his colleague, Gift Onyegam who told him that he need the account to enable his sister remit some money to him as Diamond Bank was the only bank operating where she lives. He claimed he acquiesced to the request after Gift promised to give him N3, 000 from the money he was expecting from the sister, that he never knew he was going to use his account for any fraudulent purpose.

Teneilabe’s arrest, paved way for the arrest of Gift Onyegam who confessed to having committed the fraud. He admitted getting Mary Rose Ihekanacho’s details from the Corpers’ year book and presenting himself as Abah Patrick when he spoke to Mary Rose Ihekanacho.

Gift also admitted to have received the sum of N830, 000.00 from Ihekanacho to give her employment and that he used the money to purchase a bus which according to him, got burnt after about three months.