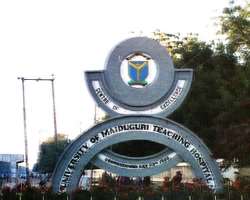 SAN FRANCISCO, May 11, (THEWILL) – Governor Kashim Shetima of Borno State on Saturday promised to fly abroad for treatment University of Maiduguri Teaching Hospital health workers whose bones were fractured when angry policemen attacked them for not accepting the corpses of their slain colleagues at the hospital’s morgue.


The governor also promised to compensate those whose properties were destroyed during the attack.


Shettima, who gave the promise, also appealed to striking doctors at the Teaching Hospital, protesting the brutalisation of their colleagues, to return to work for the sake humanity.

The governor, who was at the hospital to commiserate with the staff for the brutality suffered from the police, assured that appropriate measures had been taken to forestall a recurrence of the ugly situation.

The Chairman of the Borno State chapter of the Nigeria Medical Association (NMA), Dr. Arab Kolo Alhaji, had demanded a written apology from the state Commissioner of Police, Alhaji Abdullahi Yuguda.


He also requested that the policemen who brutalised the health workers should be punished, and the safety of lives and property of medical staff guaranteed.

The State Commissioner of Police,Yuguda, however said the policemen who took part in the assault on the health workers had been detained as he assured that such incident would not happen again.