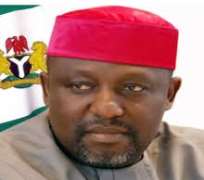 At last, Imo State Governor, Owelle Rochas Okorocha, on Tuesday, dumped his party, All Progressives Grand Alliance (APGA) on whose platform he rode to power.

The move, no doubt, has effectively put to rest speculations that Okorocha had abandoned the APGA in preference for the contentious All Progressives Congress (APC).

When he disclosed his ambition to rule the state in the 2011 governorship election, Okorocha had unreservedly told the Imo electorate that his ultimate intention was to rescue the state from decay and retardation.

He had attributed the sordid situation to the administrative malfeasance of those who had piloted the affairs of the now 37-year-old state while commending the first civilian governor of the old Imo State, Chief Sam Mbakwe, for his outstanding performance.

Okorocha's fray into the gubernatorial race received a lot of support and accolade from the Imo electorate, who saw him as a true messiah and who had come to replicate the magic wand of the biblical Moses, who rescued the Israelites from the draconian and hegemonic Egyptian bondage for decades.

Again, the governor's ambition, to a large extent, attracted the interest of the masses, not only because of his traditional record of magnanimity and generosity to the needy but because he ran on the platform of the All Progressives Grand Alliance ( APGA) led by the late Biafran war leader and Ikemba Nnewi, Dim Chukwuemeka Odumegwu Ojukwu.

Chief Ojukwu, until his death, remained the rallying point of the Igbo nation, a symbol of Igbo identity and the torch with which the Igbo race anchored their hope for freedom and survival in the Nigerian project.

Thus, with his superlative oratory and persuasive grassroots campaigns in the 27 LGAs of the state, Owelle Rochas Okorocha, despite formidable obstacles posed by his political traducers and opponents, was able to weather the storm and eventually took over the Douglas House (Government House, Owerri) on that memorable Sunday, 29th May, 2011, courtesy of the 6th May, 2011, contentious supplementary election.

However, the cracks which later occurred in the APGA at the state, zonal and federal levels and which eventually led to his exit from the very party that brought him to power to the nascent All Progressives Congress (APC) has jolted not a few of the Imo electorate.

To be sure, the APGA, founded and nurtured by the late Dim Emeka Ojukwu is widely acknowledged as a reincarnation of the First Republic National Council of Nigeria Citizens (NCNC) founded by the late Dr Nnamdi Azikiwe, the Great Zik of Africa, to represent the defunct Eastern Region in the Nigerian nation.

Just as the Action Group (AG) and the Northern Peoples Congress (NPC) represented the interests of the old Western and Northern regions respectively, the NCNC under the leadership of Dr. Azikiwe in the First Republic was able to keep the spirit of survival and doggedness of the Igbo aglow in the nation's political firmament.

Therefore, the defection of Governor Okorocha from the widely accepted political vehicle for liberation, emancipation and mainstreaming into the nation's body politics has thrown up palpable apprehension among a larger segment of the Imo society.

Investigation by Saturday Independent over the governor's defection to the still nascent fledgling APC revealed that indigenes of the state are aghast that the dream of the Igbo for a sense of belonging had suffered a setback while the Igbo presidency project may have become a mirage.

Relying on their political experience, which dates back to 1960 when the nation liberated itself from British hegemony and despotic colonialism, the Imo electorate seem not to be in a hurry to agree with the governor in his postulation that defection was part of his greater design to take them to the promised land.

The APC, which is a conglomerate of the Action Congress of Nigeria (ACN), Congress for Progressive Change ( CPC) and, of course, the Okorocha's faction of APGA is predominantly controlled by the Yoruba who are seen in most political quarters as traditional rabid foes of the Igbo.

The sad experience of the late great Zik of Africa in the old Western Region when he (Zik) overwhelmingly won election to become the premier of the region but was dramatically short-changed and sent packing to his Eastern Region base has remained a sore point in the political ideology of the Imo electorate on the possibility of the survival of their governor in the heavily Yoruba dominated APC.

While bidding final farewell to the APGA in favour of APC, on Tuesday, 7th May, 2013, Governor Okorocha had sounded it loud and clear that the idea was to re-launch the Igbo into the mainstream of the nation's political adventure.

He blamed the ruling Peoples Democratic Party (PDP) for the catalogue of woes currently besetting the nation and urged the electorate to stand firm and reject the PDP and all that it stands for in 2015.

At the brief but colourful ceremony which was attended by the governors of Lagos, Ogun, Oyo, Osun, Edo, Nasarawa and Borno states, Governor Okorocha had, in his thought provoking remarks, dismissed the PDP as People Deceiving People, who had run the country aground for the past 12 years through the initiation and implementation of ineffectual and inept policies and programmes.

However, a riddle that has stubbornly remained unresolved is the rumoured 2015 vice presidential ambition of the governor under the platform of the APC and his unsubstantiated second term dream for the Imo Government House.

If he decides to run for the governorship again as against his earlier campaign promise not to seek re-election, the question the people are now asking is; “Will he be able to make it, given the prevailing political upheavals that had, so far, befallen the state, prominent among which, is the dramatic impeachment of his former deputy, Sir Jude Agbaso.

Agbaso's surprise dislodgment from power on alleged trumped up charges is still a bitter pill which his Owerri kinsmen are not prepared to swallow.

Again, Okorocha's perceived frosty relationship with the once dreaded power blocks and godfathers is widely believed to have informed his decision to team up with the APC to make a clean departure from a sinking political ship that has no clear cut destination.

Given the gauging of the political barometer in the state, Governor Okorocha indeed needs to go the extra mile to convince the people of the very eldorado he intends to take them to.

Some critics say Okorocha, unknown to him, may have committed political suicide by leaving APGA.

Legal practitioner, Andrew Okoro, told Saturday Independent that “Owelle Rochas Okorochas is gradually dancing the macabre dance that will drown his political career. He will be shocked the way Imo people will reject him because Umu Imo (Imo people) are now seeing him as the face of deceit. He has quickly forgotten the sophistication Imo people are made off but he will soon realise, to his chagrin, that the people will reject him because he has shown that what he professes is not who he is. He will be shocked with what he will see at the next poll.”

Since the cancer of ethnic politics which first reared its ugly head in the First Republic has stubbornly refused to fizzle out from the mentality of the people, it is incumbent upon the leadership of the APC to extend its olive branch to the already apprehensive Imo electorate in order to allay their fears of possible subjugation and servitude in the entire merger project.

This is because, outside the shores of the South-East zone, Okorocha appears to be the only voice in the wilderness of liberation and until other well meaning and highly respected Igbo leaders team up with him in the political neonate called APC, skepticism, cynicism and lackadaisical attitude would continue to be the order of the day.

Additional Points from Anolu Vincent
Reacting to Okorocha's romance with the APC, the state chairman of the PDP, Eze Duruiheoma, said it is a clear case of rascality, which according to him, shows how desperate the governor is. “He was elected on the platform of a party and all of a sudden he decided to jump ship, by deserting the very party that brought him to power in favour of a yet to be registered party,” he said.

On the governor's claim that the PDP will never rule the state again, Barrister Duruiheoma said such unguarded utterance of the governor speaks volumes of one playing God. “He is not God who gives and takes away power and so he cannot be God,” adding; “The people of the state are now wiser, given what has happened in the past two years and I bet you by 2015 the governor and his cohorts in the so-called APC will not have a mouth to talk again. The people are tired by the political abracadabra going on in the state and by the time the election comes we shall know the true position.”

The chairman of the ACN in the state, Chief Charles Uba, described the governor's acceptance of the APC as a step in the right direction which would ultimately re-launch the state in the mainstream of the nation's politics. Uba, a former member of the Imo State House of Assembly for Ideato North Constituency dismissed fears in some quarters that the ACN is a Yoruba party that has no accommodation for the Igbo. The ACN chairman named a former governor of the state, Chief Achike Udenwa and the incumbent Governor Rochas Okorocha as among prominent Igbo sons in the APC, who would not allow the Igbo to play a second fiddle in the party, which he said, has a national spread.