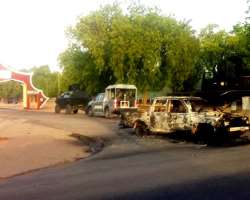 SAN FRANCISCO, May 11, (THEWILL) – Almost a week after Boko Haram gunmen launched an early morning attack on Bama, Borno State, killing 55 persons, the Shehu of Bama, Alhaji Kyari Umar Ibn Elkanemi, has described the attack as a declaration of war on the city and the worse in its annals.

The monarch, who apparently had not yet recovered from the trauma of the bloody attack, stated this while welcoming officials of the National Emergency Management Agency (NEMA) led by its Director of Administration and Supplies, Dr. Zanna Mohammed, who paid him a visit on Friday.


Elkanemi said the attack was well planned and coordinated as all the seven security facilities in the town were attacked simultaneously.

Recounting his ordeal to the visiting NEMA officials, the traditional ruler said his palace was in the midst of the attacks as the insurgents attacked the prison by its side, the police station nearby and the court in its front as early as 5am on Tuesday.

Elkanemi disclosed that immediately the gunmen started the attacks, he called the Police Area Commander on phone who promised to come to his rescue but when he could not come he had to call him five minutes later, and that was when he was told that even the Police Station were also under siege and the men and officers were trying to confront the insurgents.

Meanwhile, the major streets in the town are still deserted and empty as residents of the town remained indoors throughout the day while those who summoned enough confidence to come out, ran back home on sighting security vehicles which are the only moving vehicles on the road.


The markets also remained closed and shops in the residential areas could not even open thus making it difficult for people of the town to make essential purchases to daily survival.

The Commanding Officer of the 202 Tank Battalion, Lt. Col. Adamu Laka, said it was unfortunate that the people of the town have imposed on themselves a total curfew.

He said when the situation broke out on Tuesday, the military imposed a curfew on the town, but movement was allowed between 9am and 3pm to allow everyone to make purchases and have a feel of freedom.

He said it was however unfortunate that the residents are still afraid of being attacked and have decided to stay indoors.

While receiving the visiting NEMA team at the barracsS on Friday, Laka said: "We feel sad that they are afraid to come out, it has made life uncomfortable for everyone, even us for we have had to go all the way to Maiduguri to buy things for all shops are still close."

This came as the police, Friday, revealed that their casualties during the mayhem had risen to 26 with 25 policemen and a police woman as well as two civilian women killed by the insurgents at the Police barracks in the town.

Expressing gratitude to the NEMA team sent to the town to supply palliatives to the victims of the attack, the Area Commander of the Police, ACP Sagir Abubakar, said the two women who add up to make the loss by the police 28 persons were wives of police officers.

He said an eight-year-old daughter of one police officer was still missing.

"The DPO, DSP Lawrence Eko, was found yesterday (Thursday) along the river bank after he was killed by the insurgents," he said.

Disclosing that the attack had rendered many of his men homeless, leaving 321 persons internally displaced without good place to lay their end, Abubakar thanked the NEMA team for the food and beddings brought, pleading that tents should also be made available so that the men will not continue to sleep in the open.

The Director of Administration and Supplies, who represented NEMA Director General, said tents would be sent immediately to keep the Internally Displaced Persons sheltered even as he said the materials brought were meant for their immediate need and that other things would be brought for their convenience.

Mohammed , who visited the police and army barracks during the visit, also went to the palace of the Shehu of Bama, Ibn Elkanemi, where he offered condolences to the monarch on behalf of the Federal Government and delivered some relief materials to the traditional ruler as well.