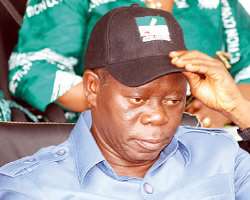 Everyone, including the least perceptive being, knows the complexion of tragedy: it is cleanly and colourlessly tragic. It does not change like the chameleon. It is constant and that is why it is tragedy. Rationalized further, it could not have been anything else, given its character and texture. Tragedy is not a respecter of persons, places and things. It strikes at will, regardless of time and space, causing total damage, leaving nothing to cheer.

It overturns everything bright and beautiful. Its expression always shocks humanity with its grimness. It assails the sensibility of mankind. Tragedy is a rapacious visitor. Whoever plays host to it will appreciate the joy of not knowing it. Although he may appear outwardly to have overcome the tension of the moment, this is the real disposition of the Edo State Governor, Adams Oshiomhole, who has been buffeted by allegation of perjury on account of lying under oath before a High Court in Benin that he was born on April 4, 1952.

But confusion set in when, on May 4, 2012, the morning of the day his Principal Private Secretary, Mr Olaitan Oyerinde was murdered, he deposed to an affidavit at a Benin High Court that he was born on April 4, 1952. The opposition Peoples Democratic Party (PDP), armed with this document, reacted smartly when it placed a newspaper advertisement on April 5, 2013 in Vanguard and Tribune congratulating Oshiomhole on his 61st birthday.

That was how the opposition got at Oshiomhole; or, was it that he naively played into its hands? The opposition PDP has continued to harangue him on account of the alleged perjury. In the build-up to the July 14, 2012, governorship election in the State, the opposition had adverted public attention to alleged forgery by Oshiomhole of his primary school certificate.

Oshiomhole’s response to the allegation as the antics of a party that ruled the state for nine years without anything to show for it worked pretty well with the people who also ignored reports that the governor was possibly diverting billions of naira of public funds to build some mansions in his expansive estate at his Iyamho village. He had gone ahead to do what he had to do in order to win the governorship election. Between then and now, so many things have changed, including the public perception of the governor. This is not even talking about the intrigues and the one-man dictatorship within the Action Congress of Nigeria (ACN) in the state prelude to the emergence of the party’s flag-bearer for 2016 governorship election.

But after the ballyhoo of electioneering during which barbs were freely bandied and the razzmatazz of the July 14, 2012 poll had subsided, the opposition PDP, at the threshold of the recent Local Government election held on April 20, 24 and 25, 2013, had raised the alarm that a perjuror is in the saddle as governor of Edo State. The perjury complained of by the opposition was a self-inflicted tragedy by Oshiomhole. He was apparently rattled by the opposition’s allegation of primary school certificate forgery that he had explicably moved to make up his details to reasonably align with his claims.

This was the reason he lied under oath that he was born on April 4, 1952-to raise the year he enrolled in primary school to four years eight months, having enrolled in 1957 going by his official records. He had probably calculated that it would be impossible to convince all reasonable persons that he enrolled in primary school in 1957 at the age of three years and eight months if he had stuck with the April 4, 1953 date, given that school calendar year then began in January. In case, I have got the facts wrong, I would like to be corrected.

Anyhow, both ages would still have been questionable in the context of the historically documentary fact and evidence that the Western Region Gazette then put the primary school age at six years. Besides, height was of the essence then. Every prospective pupil should be able to stretch his or her right hand over his or her head to touch his or her left ear. I doubt if Oshiomhole, given his height (and I know he was not an “aje bota”- born with silver spoon in his mouth and thus over grown or over sized), was able to do that. I passed that test in 1972 at the age of six when I enrolled in primary one.

The confusion over his age is the macabre dance in which Oshiomhole has been tragically involved. It is tragic that a wacky drama is unfolding about the duality of his date of birth, thus exposing, as it were, the underbelly of his acclaimed morality to collateral damage. And laughably, the defence and/or explanation that has come from the State House in Benin was that the 60th birthday indicated on the programme of event on April 4, this year, was a printer’s devil, ala his Special Adviser (Media), Kassim Afegbua.

Was it also a printer’s devil on November 14, 2011 when the same birth date of April 4, 1953 was indicated in the citation of his, read on the occasion of the award of CON to him by President Jonathan? Perhaps, realizing that the public would find it difficult to believe, Oshiomhole had, on receiving information from some of his informants in a newspaper house to which the Edo State PDP had sent, for publication on April 5, its message congratulating him on his 61st birthday, announced at the tail of the lavish 60th birthday ceremony in Benin that he wanted to shock the world. How? That he was actually born on April 4, 1952!

This inconsistency by Oshiomhole on a simple issue of birth date is a manifestation of a much deeper malaise in his administration of Edo State. A governor who could lie at will about his age for political self preservation would do anything to stay afloat in the face of combustible politics, the kind that he is now witnessing in the state.

If as a governor he could lie under oath about his age, would he not, without conscience, deploy everything within his powers to manipulate election into Local Government offices more so when the management of the electoral body that is saddled with the responsibility of conducting the polls is at his beck and call?

The opposition PDP, from all indications, is not ready to allow this alleged perjury to go without the appropriate recompense. It has already petitioned the Inspector General of Police to investigate the offence with a view to initiating his (Oshiomhole’s) prosecution at the threshold of the terminus of his second term in office in 2016. This is the expected legal “recompense.”

As for the appropriate political retribution, the Edo State PDP has called on President Jonathan to withdraw the national honour given to Oshiomhole as, according to the party, “he does not deserve it on account of lying under oath that he was born on April 4, 1952 whereas he was born on April 4, 1953.” If Jonathan withdraws the honour, it would be the first time such would happen in the annals of the country. The president had during the 2012 award ceremony declared that the honour would be withdrawn if any awardee was discovered to have been undeserving of it.

It is sad that Oshiomhole still regards this allegation of perjury leveled against him as “laughable and meaningless.” His media minders and publicists have been echoing his positions on the issue. Reading through my friend, Afegbua’s defence left me with the conclusion that there are serious doubts about the integrity of the governor on the issue of his age. These are the doubts Afegbua and his boss should have taken pains to clear; and not the annoying resort to red-herring and argumentum ad-hominem.

Edo people are not interested in Orbih and his “musketeers”, according to Afegbua, “gallivanting all over the streets of Abuja all in the name of trying to remain relevant and get media attention....” This is not and cannot be an appropriate response to the opposition’s weighty allegation of perjury!

Again, Afegbua’s response that “those who lack morality are not competent to discuss issues of honour and morality…” was begging the question. The question was and still is: can Oshiomhole be said to be above board in the instant allegation of perjury? This does not have to do with the honour and morality or otherwise of Orbih or Oshiomhole traducers in the Edo PDP and elsewhere.

It does not take a moralist or saint to point a finger of guilt at any man or woman for malfeasance; or, when has it become the norm that the weight of an allegation or offence is mitigated or even discarded on the grounds that the person who alleges does not come with clean hands? Is law no longer about hard facts and evidence? And should matters not be treated separately and on their own merits? Indeed, there is nothing as depressing as public office holders and officials of government trying to justify perfidy especially when their hands have been caught in the cookie jar of crimes.

Recall the Salisu Buhari saga. Recall also the Evan(s) Enwerem narrative. Can you remember how they kissed the dust? This is the possible scenario that is playing out in Oshiomhole’s Edo State. The wind has blown and we have seen the rump of the chicken, attempts to trivialize the issue notwithstanding. Is it not a shame?