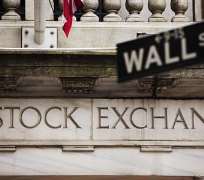 Oil and gold prices tumbled as the U.S. dollar hit a 4-1/2 year-high against the yen and the dollar index .DXY was on track to post its strongest week in 10 months, making commodities more expensive for holders of different currencies and weighing on shares in the energy and basic materials sectors.

Despite Friday's losses, lower oil prices could be another positive catalyst for stocks, according to Terry Morris, senior equity manager for National Penn Investors Trust Company in Reading, Pennsylvania.

"All things being equal, low energy prices are good for the consumer," he said.

Shares of Priceline (PCLN.O) jumped 3.7 percent to $764.90 and ranked as the S&P 500's top points gainer, a day after the online travel company reported a first-quarter profit that topped estimates. Improved hotel and car-rental reservations helped its bottom line, according to Priceline.

Shares of electric carmaker Tesla Motors (TSLA.O) jumped 11.7 percent to $77.52, adding to Thursday's gain of 24.4 percent and making it one of the top advancers on the Nasdaq Composite.

Tesla is part of a group of companies with heavy bets against them from investors. Recent upbeat results have triggered a wave of short covering.

In contrast, shares of Hess Corp (HES.N) slid 2.1 percent to $69.47. Its chief executive John Hess, son of the company's founder, is being stripped of his chairman duties as the oil and gas company scrambles to avoid an embarrassing defeat by an activist investor.

Rare earths producer Molycorp Inc (MCP.N) reported a first-quarter loss that widened from the previous year, though revenue rose sharply, driving its stock up 29.3 percent to $7.24.

Pain Therapeutics Inc (PTIE.O) shares plummeted 48.9 percent to $2.72 after the company said that Pfizer Inc (PFE.N), its marketing partner for painkiller Remoxy, has yet to decide on continuing to seek regulatory approval for the drug.