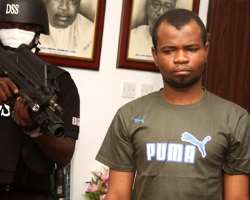 SAN FRANCISCO, May 09, (THEWILL) – More revelations were unfolded on Thursday about the man suspected to have masterminded the bombing of St. Theresa's Catholic Church, in Madalla, Niger State, Mr. Kabiru Umar, also known as Kabiru Sokoto .

Contrary to his earlier claim not to understand English, as he requested that his trial be conducted in Hausa Language, a Federal High Court in Abuja has been told that the prime suspect can speak and write good English.

At the resumed trial on Thursday, the court, which had been conducting the trial through an interpreter was shocked when one of the prosecution's witnesses told the court that the suspect willingly wrote his statement upon his arrest in very clear and precise English.

Following this shocking revelation, the court therefore confirmed its veracity from the suspect and subsequently excused the court's interpreter who had been interpreting proceedings in Hausa language to the suspect.

The witness told the court that the statement which the suspected terrorist volunteered to the investigators disclosed that he worked as a medical laboratory assistant at the Sokoto State Specialist Hospital before he joined the Boko Haram insurgent group.

The witness also informed the court that Kabiru Sokoto also included details of funding received by the insurgents from an Islamic group, Musilimi Yaa'maa, based in Algeria and how the fund brought about the splitting of the Boko Haram sect following disagreements over the sharing of the fund.

The witness also told the court that in the statement of the accused, which formed part of the evidence against him, Kabiru Sokoto also stated that the dreaded Islamic sect resorted to attacking and stealing from Christians because it was considered not to be a sin.

The witness further informed the court that Sokoto voluntarily gave the statement in which he stated that he belonged to the Boko Haram sect and that he was the governor of the sect in Sokoto State.

"He told us that they received funding from a group in Algeria known as Musulmi Yamma and that the money created a division within the sect," the witness said.

Ibrahim told the court that the statement was not obtained voluntarily and prayed the court to declare a trial within trial.

At the trial within trial, prosecution witness 2, who was identified as ABC, informed the court that Sokoto had asked for someone to take his statement while he was being interrogated because he was not in the right state of mind to do so himself.

He, however, said the statement was not obtained under duress as claimed by the defence counsel but under Biu's supervision and in the presence of other members of the team.

When called to the witness stand to testify however, Sokoto, who said he was tortured while in police custody, insisted he did not give any statement at the police headquarters.

Justice Adeniyi Ademola therefore adjourned till Friday for ruling on the trial within trial and continuation of hearing.

Sokoto, who had earlier failed in his bid to stop his trial was arraigned on a three counts charge by the State Security Services (SSS), wherein he was alleged to have facilitated the commission of a terrorist act by planting and encouraging his boys who are said to be at large, at Mabira Sokoto in Sokoto State, with the intention to bomb the Police Headquarters in the state between 2007 and 2012.

The offence is said to be contrary to section 15(2) of the Economic and Financial Crimes Commission Act, 2004.

He was also alleged to have been in possession of information about the bombing of St. Theresa's Catholic Church on the 25th of December, 2011, but failed to disclose it to law enforcement officers within a reasonable time to forestall the incident and there by committed an offence contrary to section 7 (1) of the Terrorism Prevention Act 2013 and punishable under section 33 (1) of the same Act.