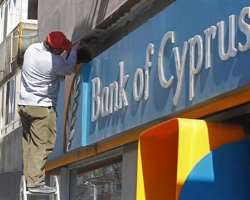 Cyprus' central bank said on Thursday most of the depositors who lost money at bailed-out Bank of Cyprus were from overseas and that Cypriots had not been hit as hard as might have been expected.

He said overall 96 percent of deposits in Cyprus were unaffected by losses on larger accounts required by the euro zone in exchange for aid to the overly indebted country.

"Certainly what happened was very painful for many depositors, particularly those who did not have loans (which were netted against deposits). But 96 percent of deposits were not affected," Demetriades said.

In exchange for a 10 billion euro bailout from the euro zone and International Monetary Fund, Cyprus was forced to close Laiki, its second biggest bank, and restructure its biggest, Bank of Cyprus, including imposing losses on deposits over 100,000 euros.

Many of Cyprus' overseas depositors have traditionally been from Russia.