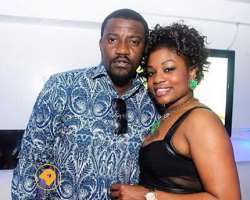 There is an interesting new twist the the story about actor, John Dumelo's marriage. After a denial from Harrina Alexander, the alleged secret wife of John on ameyawdebrah.com which was also posted on her facebook wall saying “ It's funny how media hype things up.. I am not married to this guy. We did a movie together. But I don't even know how they spelled my name on this fake stuff…”, she is back eating her words and confirming that indeed she is married to the actor.

She sent an email to that effect to me and a number of media outlets that have been asking her for details since i broke the news. It read: Hello everyone,

My name is harrina dembele, As you all know there are rumors of me and John dumelo being married.. I am not sure how it got out, but it's out and I cannot continue to lie on this situation

He may not like my confession.. But we are married. After this confession i dont know what will happen between us. But I love John and I don't see why I am continuing to deny the rumors. I want to say sorry to everyone for not keeping it real. I did not want it to come out this way but it did. Also I wanna apologize to him for doing this. Hope that he will find it in his heart to forgive me. But John is my husband and I am his wife.”

She later hit me up on facebook to speak more on the issue:

“I am tired of denying it,

He is my husband why should he be ashamed of me

That's he wants to keep me a secret. And run after girls

I married him I know what I was getting into. But the way he is going about all this is not good. Why should we be telling lie

I am not making any movie with him.”