HE WEARS THE RING OF THE BAPHOMET 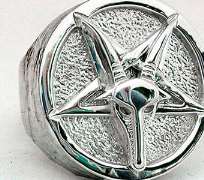 He wears the ring of the Baphomet and he is a lover of women. He rides them like a devil, with a deep and ferocious passion. They fall in love with him instantly yet he cannot be reigned in or controlled. He is a danger to women. He is wild and free. He walks out of the room coldly, moves on and leaves them behind.

Yet thoughts of himcontinue to ravage their minds and threaten to drive them insane. They are victims of his Baphomet spell. They feel sad, humiliated and used. They say to themselves ''if I can't have him, no-one will have him''. They plan to destroy him. He is the object of their love and hate all at once.

He should have controlled his sex drive and kept his giant weapon to himself. He should not have serviced and loved them with the vigour, depth and passion of a god from Mount Olympus. He should not have taken them to heaven and brought them back to earth with a bump.

This servant of the Baphomet drives women insane with pleasure. He is a danger to women. His gentle touch lights up their fire and kindles an insatiable lust in their bodies, spirits and souls. Once he has pleasured them, no-one else matters and they cannot let him go.

It is just the chemistry and the aura he radiates. Once he touches them they are obsessed with him for life. And it is instantaneous. Lustful thoughts of his giant weapon plague and torment them from morning till night and from night till morning.

He drives them insane with his wild and unrestrained visualisations, his vivid fantasies, his filthy words and his fertile and sensual imagination. He demolishes their inhibitions and he removes their sense of decency and self-restraint. They go wild when he mounts them. Whether princess or pauper they forget who and what they are and they enter the palace of pleasure with this servant of the Baphomet.

He destroys their restrictive thought-processes and their cool rationality with his burning sex appeal, his unrestrained and raw power and his primitive passion. Once he has ravaged them and had his wicked way they cannot let him go.

They alone must enjoy the sheer pleasure that his tireless weapon and insatiable tongue brings. This man stirs passions that no mortal is meant to stir. He is a labial lover. He is a burning fire. He is a danger to women. And he wears the ring of the Baphomet.