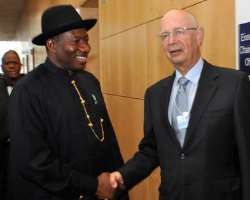 SAN FRANCISCO, May 08, (THEWILL) - President Goodluck Jonathan said Wednesday in Cape Town that following the total privatization of power generation and distribution in Nigeria, his Administration expects an annual private sector investment of about $10 Billion in the country’s power sector over the next ten years.

A statement signed by Reuben Abati, Special Adviser to the President on Media & Publicity said the President was speaking at the World Economic Forum on Africa which opened Wednesday in the South African city, President Jonathan said that realizing that government alone cannot build the infrastructure that the country needs, the Federal Government has completed the biggest transfer of power assets in Africa to private investors.


The President said that to speedily overcome the infrastructural deficit that currently limits the pace of their economic development, Nigeria and other African countries must find innovative ways of funding essential infrastructure in areas such as power supply , energy and communications.

The President said that he was delighted that PIDA will build on plans established under previous initiatives such as the NEPAD Medium to Long Term Strategic Framework and the African Union Infrastructure Master Plans.

He said that Nigeria will continue to support the development of continent wide infrastructure such as the Nigeria-Algeria Gas Pipeline Project and the Lagos-Abidjan Highway Project.

President Jonathan however disclosed that in the light of recent developments in the global gas industry and the collapse of gas prices, the Nigeria-Algeria Gas Pipeline Project concept is being reviewed to determine its continued viability.

Observing that it is estimated that Africa requires about 100 billion US dollars annually for infrastructure development in the next decade, whereas only a quarter is being spent today, President Jonathan said that it was clear that Africa could not “thread this path alone”.

He therefore thanked the World Economic Forum and other critical stakeholders for supporting Africa’s progress towards the development of “21st Century infrastructure”.

“I urge you all not to relent in your efforts,” he concluded.