Celebrating Africa Day in 2013, where is Kwame Nkrumah's United States of Africa 50years on? 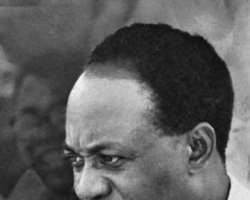 To survive and compete with clout in a rather realist and emulous world Africa has little choice but to unite. It is home truth and a verdict very few political and economic analysts disagree with. For the Pan-Africanist, African unity is much more than plain common sense, it is an article of faith informed by acute intellect and driven by home grown ideological fervour.

It has always been the Pan-African gospel espoused by those convinced that African people are one nation and that Africa is better served united than balkanised along same old colonial and arbitrary dividing lines. 'We all want a united Africa, united not only in our concept of what unity connotes, but united in our common desire to move forward together ...' was how Osagyefo Dr Kwame Nkrumah of blessed memory summed up this Pan-African gospel of African unity whilst attending that historic summit in Ethiopia where the Organisation of African Unity (OAU) was given birth to in May 1963 to breathe oxygen into the unity momentum.

In those early '60s, African unity really provoked quantum passion and flurry of propositions throughout Africa even as the newly independent countries were euphoric of national independence and liked to parade their sovereign pride in national flags, anthems, coats of arms and motorcades. For a continent that was emerging from colonial exploitation replete with deprivation and non-infrastructural and institutional development Nkrumah and his radical Casablanca bloc were the most compelling against the status quo.

The only bright future Nkrumah envisioned in Africa was one in which the entire continent agreed to a common market, a single currency, an African Central bank, a common foreign policy, a common defence system and a common citizenship amongst others. Anything short of the above was a recipe for further exploitation, decadence and a futureless people with hardly any potential for appreciable development and international actorness.

Unable to stand up to the self evident vision boldly and eloquently articulated by Nkrumah, sceptical peers known for their cold feet and back paddling ducked into comfort zones and made a structural case for moderation and gradualism. Known collectively as the Monrovia bloc for their conservative approach to unity, they won as the OAU that was established as a result fell far short of the United States of Africa Nkrumah called for, and any potential for unity was seriously eroded by a self-defeatist principle of 'Non-interference in the internal affairs of Sates.'

And thus, Mwalimu Julius Nyerere, one of the organisation's founding fathers and sterling advocates of the unity cause, would later look back and lament that the OAU was nothing more than a "trade union of the African heads-of-state'. Nothing surprising there since the constituent document of the OAU was never a 'we, the people of Africa' charter but rather one of 'we, the Heads of African States and Governments'.

What is probably amazing was Nyerere's other admission that Nkrumah had 'underestimated the degree of suspicion and animosity which his crusading passion had created among a substantial number of his fellow heads of state' too many of whom had a vested cause in keeping the continent balkanised. This admission came in 1997 when the European Union (EU) was being celebrated as the most successful example of a continental union with such clear benefits the motives of Robert Schuman and other founding fathers have never been suspect, at least not to the extent of deliberately derailing efforts at unity.

Yet, as Africans celebrate Africa Day in 2013 on the 50th anniversary of the OAU, now known as the African Union (AU), the reality of African unity on the ground suggests the gradualist view and those vested interests still hold sway. With the independence of South Sudan in 2011, Africa today is a continent of fifty four sovereign countries, each with profound attachment to individual state nationalism and strict regimes of border controls where Africans are still deemed foreign or even illegal immigrants in African countries other than those of their birth and citizenship.

While an African being labelled an immigrant anywhere in Africa is at odds with a continent that has talked unity for fifty years, the real travesty is the oft report of deportations and/or targeted victimisations of fellow Africans resident in other African countries. Much worse and patently scandalous are ethnocentric complexes of superiority within countries that sometimes degenerate to points of entrenched prejudice or civil conflict. The sum total effect on African unity is one that suggests the AU is some distant project in Addis Ababa far removed from the rights of African people to equal opportunity and dignity and their collective dreams and aspirations to freely move and trade labour, goods, services and capital as in pre-colonial times of old or as in the present coeval EU.

Nonetheless, the continental infrastructure for unity has had its day in the sun too. The sunshine was all the more glorious when in 1994 Africans finally triumphed over apartheid in South Africa. In effect decolonisation remains one of, if not, the greatest achievement of a concerted effort of a continent seeking to free her people from bondage in the land of their forebears. This is no mean record for the OAU. For the AU the admission and eventual acceptance that there is no alternative to development progress and international actorness other than that of the unity blueprint is palpably the most auspicious this far.

The Sirte declaration that enacted the AU adapted a common peacekeeping force, agreed to have an African Central Bank, resolved to work towards achieving a single currency and strive to accelerate economic and political integration. In the area of security alone this new resolve is beginning to yield dividends as the AU is able to synergise resources from amongst member countries to keep the peace in troubled parts of the continent such as Darfur, Somalia and Mali. Finally, albeit still too slowly, the continent is beginning to wake up to the Pan-African aphorism that African problems are best solved by Africans themselves.

But for the AU to be able to cultivate 'a united Africa, united not only in our concept of what unity connotes, but united in our common desire to move forward together ...' it will have to first grow teeth of steel. For that to happen, the constituents of the AU would have to quickly rehearse singing from the same page on international affairs. To achieve this, national governments have to be keenly wary of the divide and rule tactics subjectively employed by external hands such as from former colonial capitals in furtherance of their own national interests. And the poverty gap between countries often trumpeted as a barrier to unity is one of those cause and effect arguments that will not go away until African leaders bite the bullet decisively.

The symbolism of celebrating Africa Day on 25th May every year is certainly laudable but arguably isolated and possibly insufficient in promoting and keeping the Pan-African ideal of unity alive and attractive. The AU has to agree a curriculum that clarifies and outlines what constitutes Pan-Africanism or African unity, and have it taught in schools and colleges throughout the continent. It should constitute a significant criteria in the African Peer Review Mechanism, further to which all African countries that fly their flags at the AU headquarters in Addis Ababa should also fly the AU flag everywhere their own national flags are hoisted. This will serve notice of a shared commitment to unity and conjointly give instant visibility to the AU in the eyes of Africans and across the globe through the many African embassies doted all over the world.

Kofi Annan is on record as having said at the launch of the AU in 2011 that "To build a successful union ... will require great stamina and iron political will.' It is that great stamina and iron will that will ultimately draw a line between the OAU and the current AU. Hence, governments of the fifty three member countries of the AU will have to concede those reflexes that instinctively inure them to self survival over and above the success of a continental super structure.

And there is no better therapy of eschewing narrow nationalism in favour of progressive African unity than consciously applying will power and selfless leadership to making the resolutions of the Sirte declaration work now. Africa can get there and should get there, not because Nkrumah once said so but because the alternative of failing to unite suggests continued pauperisation of its people and vulnerability of fifty four non-viable countries manifestly expressed in pathetic debility whilst competing among much better positioned international actors in the global arena.

Disclaimer: "The views/contents expressed in this article are the sole responsibility of the author(s) and do not necessarily reflect those of The Nigerian Voice. The Nigerian Voice will not be responsible or liable for any inaccurate or incorrect statements contained in this article."
Articles by Samwin John Banienuba
16-6-2016  The Greatest Of All Times Retires Home To Ancestral Glory, Fare Thee Well Muhammad Ali!14-3-2016  Boutros Boutros-ghali Goes Home To Rest In Peace5-8-2015  Of States And Human Behaviour And The Sleeping African Beauty1-6-2014  Africa In Brazil And The 2014 World Cupredefining Afro-brazilian Relations9-4-2014  Me, Myself And I And The Evolving African RealityMore...