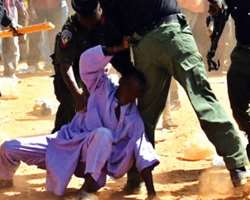 SAN FRANCISCO, May 08, (THEWILL) – Two officials of Power Holding Company of Nigeria (PHCN) in Sapele, Delta State, were alleged to have been beaten to a pulp by a soldier attached to the state Commissioner for Environment , Chief Frank Omare, on Wednesday and were left in the pool of their own blood.

It was gathered that trouble started when an articulated caterpillar being used the Ministry of Environment to demolish illegal structures and clearing of blockages, natural waterways and drainages allegedly damaged some electricity installations belonging to PHCN in the town.

The caterpillar was said to have destroyed over five electric poles and cutting down live electric cables in the process.


Apparently sensing danger and in the bid to protect lives of passers-by, the PHCN staff on duty at that time was said to have tried to caution and direct people along that line, including the caterpillar and a vehicle load of soldiers attached to it, to stay clear from the area.


But instead of treading with caution, one of the soldiers attached to the Commissioner reportedly descended on the PHCH official, beating him mercilessly for daring to interrupt their work.


Sources said while the soldier was allegedly beating the official, the PHCN Business Manager in the unit, Engr Orhukpe F.A, whose attention was drawn to the attack on his staff, had immediately rushed to scene, pleading with the Commissioner for Environment to prevail on the soldier to stop further attack.

But the Commissioner was said to have rebuffed him as the Business Manager was also held by the soldiers.


It was learnt that it was only when irate youths began thronging the scene following the pandemonium which it created that the soldier left the officials in the pool of their own blood.


As a result of the incident, the people of Ugbekoko road axis of the city have been thrown into darkness, owing to the serious damage on the 11KV feeder transformer which supplies electricity to the area.


The Public Relations Officer of Sapele Business Unit of the PHCN, Mrs Evelyn Gbiwen, who confirmed the incident, told newsmen in Sapele that electric poles and cables which supply electricity to the area were damaged.


Gbiwen said the damage was done when an articulated vehicle carrying a swamp buggy, belonging to the Ministry of Environment, in charge of the demolition exercise, rammed into the 11KV feeder transformer and destroyed it completely.


She narrated that when the incident occurred, staff of PHCN on duty at the time, led by the Service Manager, Mr Ogbotor, responded to save the area from possible case of electrocution, by preventing passersby from stepping on live cables.


She confirmed that the PHCN staff who were trapped and severely beaten to pulp by the soldiers had been admitted at the Sapele Clinic where they have been placed under intensive treatment.


At the Sapele Clinic, a doctor who spoke on condition of anonymity confirmed that the affected PHCN staff were on intensive treatment and were not fit either speak or go back to work until their conditions improve.