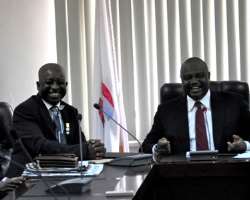 SAN FRANCISCO, May 08, (THEWILL) – The chairman of the Economic and Financial Crimes Commission, EFCC, Ibrahim Lamorde Wednesday pledged the Commission’s support to the Criminal Justice Reform Committee of the Nigerian Bar Association. Lamorde made this pledge when he received members of the committee who paid him a courtesy visit in his office.


Welcoming members of the committee, Lamorde assured them of his support as the work of the committee was imperative to effective delivery of justice. He explained: “the committee is a very important part of the NBA in the sense that if there is any contentious issue that has become a source of concern to many Nigerians it is the criminal justice administration in the country, in the sense that we are getting to a point that the ordinary citizen thinks he cannot get justice. So that is why your committee has a very important role of assuring the ordinary citizen that he will get justice if he goes to court.” He challenged the committee members to make their mark felt.


Dr. Garba Tetengi, Senior Advocate of Nigeria and chairman of the committee said they were in the EFCC to seek the support and partnership of the Commission.


He said both the Committee and the EFCC must work together to achieve the objective of the reform. He stated that part of the committee’s mandate is to partner with relevant agencies so that they could hold workshops and conferences in order to further the aims and objectives of the NBA.


He pledged his committee’s support to the Commission, stressing that seminars and workshops will be organized to foster good relationship and understanding between them.