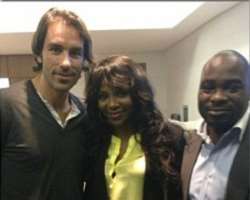 When it comes to rolling and dinning with international stars and figures, Nollywood actress, Genevieve Nnaji is not lagging behind in that 'all important course'.

Just like a five-unit project course, which cannot just be carried over, that is how it is to Genny, as she is fondly called by some of her fans.

At the recently held Beyonce's concert, the Nollywood export made sure she had 'mad' fun at the event. Also, like in most occasions, which are sometimes used to mingle and network, Genevieve did not 'slack' as she also networked at the concert.

The actress posed for a photograph with ex-Arsenal FC footballer, Robert Pires. Also in the picture is popular businessman called Alex Amosu.