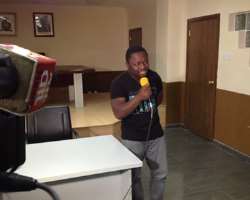 The suspect confessed that he hatched the phantom plot to extort money from Senator Etok by exploiting the perceived rift between and the Governor of Akwa Ibom State, Chief Godswill Akpabio. He said he had wanted to use the proceeds to pursue a Masters’ degree programme.

According to the Deputy Director of Public Relations of the Service, Ms Marilyn Ogar, the Service swung into action following a letter titled: “Report of planned assassination by a man who calls himself General Africa (an ex-militant) by Senator Etok to the Service.

Ms Ogar said on getting the letter the Service had directed the Senator to play along with the suspect which eventually led to his apprehension on April 29, 2013.

The suspect, a graduate of Mechanical Engineering from Rivers State University, Port-Harcourt, Rivers State, said he went to NDDC office in Port-Harcourt to submit a mail where he stumbled on a mail bearing Senator Etok’s complimentary card from where he obtained the Senator’s number.

He said being aware of the political interests between the Senator and the Governor over the Ikot Ekpene Senatorial seat by 2015, seized the opportunity to contact him.

He said he had introduced himself as General Africa, an ex-militant from Bayelsa State and then told the Senator that he had been contacted by three of Governor Akpabio’s loyalists to assassinate him.

According to Mr Olaore, in order to convince the Senator, he offered to furnish him with details of the Governor’s purported bank account and Energy Company in South Africa. He however confessed that he had never met Governor Akpabio or any of his loyalists.

He said he hatched the plot to defraud Senator Etok using information he obtained from open media about a rift between the Senator and Governor Akpabio, and pleaded for leniency.

Spokesperson for the Service, Ms Ogar said Mr Olaore would be charged to court warned the general public to be wary of individuals who exploit activities, be it political, religious or economic for criminal ends.