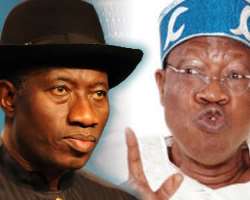 SAN FRANCISCO, May 05, (THEWILL) – The Presidency on Sunday hit back at the opposition Action Congress of Nigeria (ACN), saying President Goodluck Jonathan is not a despot.

Dismissing the recent statement of the National Publicity Secretary of ACN, Alhaji Lai Mohammed, that the Jonathan Administration was “descending into despotism,” the Presidency said it represents yet another attempt by the ACN and its spokesperson to stand the truth on its head and indulge in the politics of abuse.

A statement signed by the Special Adviser to the President on Media and Publicity, Dr. Reuben Abati, therefore described the opposition ACN as the real abode of budding despots in Nigeria.

“The latest press statement by Lai Mohammed of the Action Congress of Nigeria, in which he claims, wrongly as always, that the Jonathan administration is “descending into despotism,” represents yet another attempt by the ACN and its spokesperson to stand the truth on its head and indulge in the politics of abuse. They should not be allowed to get away with their perfidy.


“President Jonathan is a democratically elected leader who is running a people-oriented, inclusive and progressive government. Under his watch, Nigeria’s democracy has been consolidated; the scope for human freedoms has been further expanded and there is respect for due process and the rule of law. Ordinary Nigerians appreciate the fact that they have a President who is humane, disciplined and focused.


“Does Lai Mohammed know the meaning of the word, despotism, or is he just throwing the word around for onomatopoetic effect? He and his sponsors are in fact beneficiaries of the openness and freedom that this administration promotes. The paradox is that those who do not allow freedom and equality in their own party or backyard, those who are well known as self-proclaimed Godfathers and closet despots, are the same ones who are now quick to accuse others of despotism.

“The ACN should start by removing the log in its eyes. President Jonathan is not a despot. ACN is the real abode of budding despots in Nigeria.


“The Transformation Agenda which Lai Mohammed tries to pooh-pooh is a well thought-out blueprint on the basis of which this administration continues to serve the interests of the people and move the country forward.

“The evidence of the Jonathan administration’s achievements is visible in many aspects of Nigerian life and society: from agriculture, to aviation, the economy, job creation, power, industry, trade and investment, transportation and others. No amount of name-calling or partisan criticism will distract the government’s attention, just in case the ACN assumes that its persistent distortion of the facts will achieve that objective.


“The ACN’s allegation that there is a disagreement between the Rivers State Governor, Rotimi Amaechi is also wrong-headed and mischievous. Governor Amaechi has publicly stated that this particular allegation is a piece of fiction created by certain persons and the media.

“We insist that President Jonathan is not engaged in any quarrel or dispute with Governor Amaechi. And it is wrong to use the matter of the aircraft that was grounded by the aviation authorities to concoct stories of persecution.


“The institutions involved have offered reasons publicly why they took their decision with regard to the unlicensed aircraft, which in any case is an asset of the state, not the Governor’s personal property. The President has nothing to do with that incident.


“The ACN claims that there is “a growing propensity to stifle the freedom of expression and freedom of the press.” The report by the Committee to Protect Journalists which the ACN quotes is not a comment on government-media relations in Nigeria. This administration sees the media as a strategic partner in the business of nation-building. The government not only enjoys a robust relationship with the media, it continues to encourage the freedom of expression and of the press.


“Lai Mohammed tries to substantiate his dubious claim by seeking to build something on nothing. He tries in vain. The truth is that the Nigerian media is pluralistic, vibrant, independent and free; it has grown in scope, size and in terms of the freedom to practise under this administration.


“All lovers of democracy must join us in reminding the ACN and its spokespersons that they cannot pull down this house with mere spittle because our democracy is strong and solid and the man at the helm of affairs is a democrat and a progressive leader,” Abati said in the statement.