Two Clerics, Others Beheaded By Boko Haram In Borno 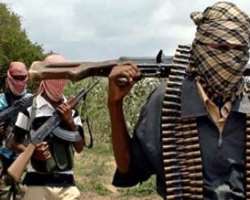 SAN FRANCISCO, May 05, (THEWILL) – Two Islamic clerics and two other residents of Ngamdu, a border town between Borno and Yobe States, were killed, weekend, by unidentified gunmen suspected to be Boko Haram members during an attack on the town.


Ngamdu is located 100 kilometres, west of Maiduguri, the Borno State capital, on the road to Damaturu, the Yobe State capital.

The gunmen were said to have stormed the town at about 9:30pm on Saturday in two motorcycles, armed with knives and machetes, tying the hands of their victims to the back before slaughtering them like rams.

A cleric identified as Mallam Sheriff and another cleric whose name could not be ascertained at the time of filing this report, were killed by the bandits, who were said to have also slaughtered two other residents of the town during the attack.


Sources in the town disclosed that the clerics may have been singled out for killing due to their critical stand on the activities of Boko Haram while the two others were said to have been issued a warning letter to vacate the town earlier in the year.

While the gunmen fled the town immediately after the attack towards Maiduguri, policemen were said to have arrived at the slain victims’ houses only on Sunday morning when the relations of the clerics and residents were already performing the Islamic rites to bury the dead.

Though a senior police source, craving anonymity, confirmed the killings, all attempts to get an official confirmation from the spokesman of Borno State Police Command, Gideon Jibrin, were unsuccessful as he could not be reached on his mobile telephone line when filing this report.