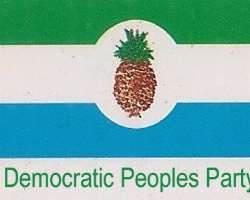 SAN FRANCISCO, May 05, (THEWILL) – More facts have emerged that the embattled Deputy National Chairman of the Democratic Peoples Party (DPP), Olisemeka Akamukali, is allegedly being used by Senator Pius Ewherido, representing Delta Central Senatorial District, with the intent of grabbing the 2015 guber ticket.

Akamukali and Ewherido were last week suspended by their state chapter of the party for anti-party activities after it was reportedly discovered that the duo had plotted to hijack the party's National Secretarial to actualise their dream.

Prior to the merger move by the party to which it set up a 12- man committee comprising of Akamukali, Ewherido, Chief Great Ogboru, and others to liaise with the All Progressive Congress (APC) on how DPP could be part of the opposition merger, Olisemeka Akamukali had plotted to outsmart the party by writing to the Independent National Electoral Commission (INEC) posing as the National Chairman of the party.

It was reliably gathered that INEC suspected a foul play and subsequently turned down the embattled DPP deputy National Chairman's letter of request to convoke a National Convention of the party.

Though sources said that INEC turned down the application because Akamukale was not known as DPP National Chairman, with the backing of Senator Ewherido, the duo were however said to have met with a few State Chairmen of the party where he (Akamukali), reportedly pronounced himself the National Chairman of the party, thus forming a splinter group to actualise the Ewherido's dream of securing the guber ticket under the new merger platform.

Ewherido, who is reportedly financing the new Akamukali faction of the DPP, is however said to be unaware of the game plan of the embattled deputy National Chairman who is said to be pursuing a Delta North agenda.

Ezeagwu told THEWILL that actually the party had applied to be part of the APC, to which they inaugurated a 12-man committee to midwife the merger process ."So we officially applied but the application was not approved but Ewherido and Akamukali who were merely sent by the party headquarters went ahead to join APC as if they went there on their own volition," he said.

He accused Akamukali and Ewherido of undermining the party by wanting to outsmart everyone so that it would look as if they have defected and have pulled their supporters along.

Ezeagwu disclosed that the suspended deputy national chairman had tried to convince DPP legislators in the Delta State House of Assembly to follow him but they refused, saying they can't join an unregistered political party.

"At the end of the day, they (DPP lawmakers) came and told me that he (Akamukali) was talking about APC. He's neither here nor there. He was just trying to convince them on why they must follow him. He now has a different agenda from what DPP as a political party has.

"He now wants to make it look before that group that he's in charge and he's the one defecting with all the legislators.

"I think about three State Chairmen went for that meeting and he held the meeting with them and assumed that was the NEC meeting of DPP. From there, he proclaimed himself rhe acting National Chairman. So, Wednesday last week, we held a caucus meeting and this issues were brought up.

"But Ewherido, who is eyeing the Delta State governorship in 2015 didn't know that Akamukali has his own ambition to pursue," he stated, adding that Ewherido has been scheming to hijack the party at the state level but right now "Ewherido is nowhere, he's neither here nor there, he's floating as a senator without a party for now."

Ezeagwu told THEWILL that the embattled Deputy National Chairman of the party is an impostor who is only deceiving the senator that he can give him the party's ticket without a fight.

According to him, Olisemeka Akamukali was only nominated in an acting capacity to replace Chief Frank Kokori, who was ousted out of the party pending when a national convention would be held.

He said Akamukali is not expected to automatically turn himself to the National Chairman of the party.

He said that no convention has been held since then but Olisemeka Akamukali has been parading himself as the National Chairman of DPP after a "kangaroo" conference they purportedly held in Abuja.

Ezeagwu said based on the fact that he was nominated by the State Chapter of DPP, the State chapter has the right to recall him, which they have done by way of suspendind him from the party.

He further stated that DPP has officially pulled out of the APC because a majority of its members, including those in the House of Assembly, do not want to be members of an unregistered political party.

Consequently, the Delta State chairman has threatened that Ewherido would soon be recalled from the Senate since he claimed they have joined a merger party, APC, whereas the State Chapter to which he won election has opted out of the merger.

He described those forming splinter groups within the party as rebels and dissidents who are over-ambitious.

While saying that "nobody among them has the powers to slam suspension on me," Ezeagwu said, according to a document made available to THEWILL, the subsequent motion for their expulsion was unanimously moved in three parts and signed by Chief (Amb) Tony Ezeagwu (DPP Delta state Chairman), Chief (Engr.) Lance Orhiehor, RDN (DPP Delta Sate Secretary) and Prince Charles Orakpokuenuke Ikpama (DPP state Treasurer) respectively.

He said the state chapter of the party has the right to suspend the embattled deputy national chairman, who is from Delta State because "Akamukali did not go to the national level of the party as an elected deputy national chairman. We appointed him to the position in acting capacity after the resignation of Frank Kokori who [was] elected during our convention. So we are only recalling him from that position.”

However, Ewherido didn't reply to the message sent to his mobile phones but he was earlier quoted to have said; “We had at the national level opted for merger. Those doing this are those opposed to our joining APC as ratified by our Convention two days back.

“Whatever they have done is a total nullity because the vast majority of us have ratified the merger. Democracy is about freedom of choice,” Ewherido was quoted as saying.