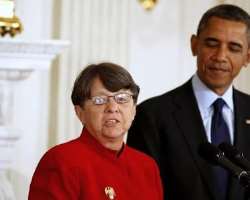 The top securities regulator remained tight-lipped on Friday about the details of her agency's efforts to craft reforms for money market funds, probably disappointing an audience of fund industry executives who gathered in Washington for an annual conference.

In her first major speech since taking the helm of the Securities and Exchange Commission 18 days ago, Chair Mary Jo White said the agency's proposal would "preserve the economic benefits" of the product, while still addressing the potential for runs that could harm retail investors.

But that was as far as she would go.
"While I'm sure that you would like me to say more about this today, I'll stop," she said in her speech to the members of the Investment Company Institute, the major trade organization for the fund industry.

"The staff and commissioners are actively engaged in discussions designed to yield an appropriate and balanced proposal in the near future."

Since last year, the SEC has been struggling to come to an agreement on how to craft new reforms aimed at the roughly $2.6 trillion money market fund industry.

Former SEC head Mary Schapiro had sought support for reforms she said would prevent runs on funds like the one experienced in 2008, when heavy exposure to collapsed investment bank Lehman Brothers caused the net asset value of the Reserve Primary Fund, a large money market fund, to fall below $1 per share, or "break the buck."

Schapiro had pushed for two potential approaches. One called for capital buffers coupled with redemption hold-backs. Another suggested moving from a stable $1 per share net asset value to a floating NAV, so that investors would not get spooked by the prospect of funds breaking the buck.

But the two proposals met fierce opposition from the industry's major funds as well as the ICI and the U.S. Chamber of Commerce, all of which warned that the proposals would effectively kill the product.

Schapiro's proposal also left the SEC gridlocked, with three of its five commissioners refusing to support her plan until the agency's economists completed a study to determine if more reforms were needed.

After the three commissioners declined to vote for Schapiro's proposal last August, the U.S. Financial Stability Oversight Council decided to take up the issue to pressure the SEC to come to a consensus on new reforms.

Schapiro left the SEC in December, but the agency has continued trying to work toward a solution that can reach a consensus.

Although the industry still opposes a floating NAV, some large players, including Charles Schwab Corp, have signaled they could live with a scaled-back approach in which only prime funds for institutional investors would be required to move from a stable to a floating NAV.

On Thursday, the Wall Street Journal reported that SEC staff members were discussing the industry's middle-of-the-road proposal to target only prime funds, citing people familiar with the matter.

On the sidelines of Friday's event, White declined to comment when reporters pressed her for details on how the reforms may look.

"It's an ongoing process internally," she said. "I think we've said what we can say."

Ever since the first effort to craft money market fund proposals failed last year, the SEC has been careful to keep its negotiations on money market reform under wraps.

White, for her part, has remained coy about her policy views generally since she was tapped for the top SEC post.

She did tell the audience, though, that she expects the final product to take different viewpoints into account.

"I am confident that the ultimate result of this process will take into account the views of commissioners who vary in background and perspective, but share the goals of protecting investors and promoting market efficiency and capital formation," she said.